Urban growth in the 19th century was fostered by industrial development. The new urban hubs brought about the need for a better transport service because of the increase in labour and commercial relations. In the second half of the century, the transport networks were installed, which evolved along with technological development.

The first railways and urbanisable land in Barcelona imprinted an urban dynamic with the occupation of the plan and the creation of public transport. The omnibus covered the Ciutat Vella and progress promoted the first suburban lines.

Transport demanded new technologies. The animal-powered tram represented modernity and the beginning of the development of tram services. The City Council observed this development, worked on its regulation and discovered a source of income.

The bus was incorporated into Europe. As in Paris, Barcelona was building the first metro tunnels, making the most of the urban reforms. Buses and the metro were not definitively installed until the 1920s.

The Civil War dismantled the bus network, and the trams resumed greatly weakened services. The City Council began to municipalise transport, with the increase in metro and buses, but demographic and urban expansion erased the tram network due to a lack of future investment. Recovered later, it has contributed to forming a transport network that is suitable for the Barcelona conurbation. 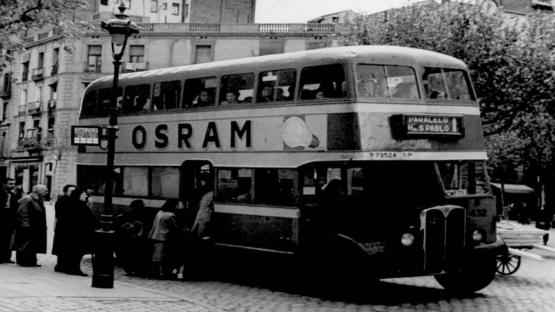