The Law 'for the purging of civil servants' of 10 February 1939 was published under the protection of a certain victory soon after the fall of Catalonia, as its preface explained: 'the liberation of the new territories, and especially that of Barcelona, a city that has been the seat of the Red alliance in recent times, poses with urgent pressure the problem of the purging of public civil servants'. It was developed with the aim of compiling the disparate purging legislation established until then and of definitively determining the purging procedure.

As this new legal framework established, and as Barcelona City Council decreed, the municipal civil servants appointed before 18 July 1936 had to report within a period of eight business days to the offices of the City Council to complete 'the initial proceedings of the case'. These initial proceedings consisted of a sworn declaration that accompanied the request to re-enter the City Council. It was a matter of filling out a questionnaire that obliged the civil servant to answer between 21 and 23 questions, and which helped the purge court to establish the professional, ideological and moral profile of the civil servant to be purged. There was also a space reserved for the civil servant to enter their military (or paramilitary) activity, as well as to contribute to the purge process with any possible denunciation of all those 'illicit' activities that they had recorded in relation to any municipal worker.

Once the sworn declaration was complete, the instructional judge proceeded to check the veracity of the facts submitted by the civil servants. To do so, they asked the various information services at the disposal of the purge court to prepare socio-political reports on each of the civil servants. In the case in hand, the majority of the personal reports were carried out by the Information Services of the Spanish Falange, the Police and the Civil Guard, as well as, in some cases, those of the Military Police (SIPM). The Personnel Department of Barcelona City Council itself also contributed to completing the purge proceedings. In an atmosphere of general suspicion, the informants gathered information by questioning the personal and professional environments of the civil servants and, often, reported facts without the slightest verification of their truth.

Once the socio-political reports were collated, the instructional judge decided whether there were imputable elements that needed to be clarified, and, therefore, the purge proceedings were initiated or the civil servant was admitted without sanction and the case was definitively closed. Those civil servants who had proceedings initiated had eight business days to draft their plea sheet, where they had to prove the accusations imputed false. To strengthen their position, they could also provide all kinds of witnesses confirming their version of the facts. The trustworthiness of the witnesses, those groups who had before too long supported the Francoist uprising (the church, industry, Falangists, proprietors, etc.), could substantially improve the position of the civil servant in the purge judgement. The collection of witness statements closed the procedures for the defence and plea of the civil servants. 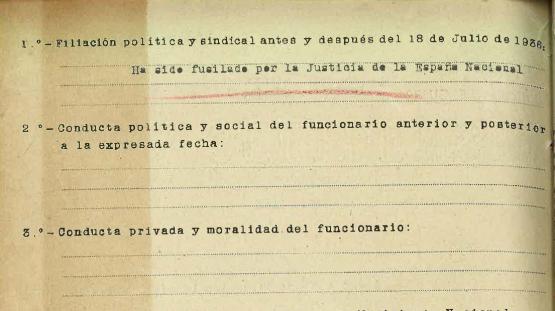 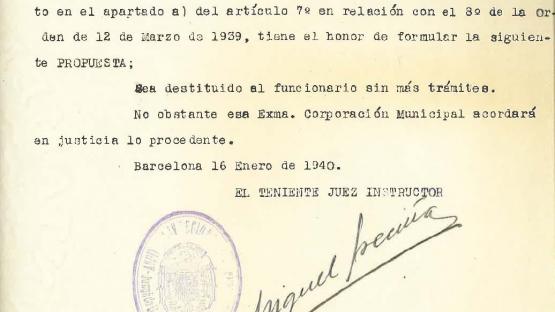