Results of the purge process

Among the civil servants who had proceedings initiated, a little over 1,600 received a sanction. Of all those sanctioned, almost 700 received temporary sanctions, between one month and two years, of suspension of work and pay. Sometimes, this was combined with a disqualification from occupying leadership posts or trusted positions. In all, however, most of the civil servants who received a temporary sanction received less than six months.

The rest of the sanctioned civil servants, 922, received the maximum possible sanction, dismissal. However, at this point we must distinguish two groups among the dismissed people: those that were dismissed as a result of completing the entire purge process, and those who were dismissed 'in rebellion', that is, those who had fled the country knowing that the regime had them marked as Republicans and those who decided to leave their civil service career and not return to the service after the end of the Civil War, all of whom were dismissed for 'incompetence or abandonment of the service'. Finally, we must also mention a number, that should not be underestimated, of civil servants who were dismissed for having been condemned by other reprisal tribunals, military tribunals in general. In these cases, the purge tribunal acted as a subsidiary tribunal for the decisions of the military courts and a firm conviction in the latter automatically meant dismissal as a municipal civil servant.

In little over a year, the Francoist regime had completely purged Barcelona’s municipal Administration. And in a little over two years, it had attained the practical standardisation of this staff of civil servants (even including the fulfilment of the temporary sanctions imposed). In the municipal budget of 1942, a consolidated municipal staff is already included. Given the restrictions of the Law of purging civil servants, many people sentenced to sanctions could not review their case until the fifties, when a path was enabled, through the Civil Governor, for the review of the sanctions of the purge courts.

Currently, the set of all these files forms the series 'Political Reprisal' (F193) from the Barcelona City Council Fonds, and can be consulted at the Contemporary Municipal Archive, which is responsible for guarding it.

Professor of Contemporary History at the Arts and Humanities Department of the Open University of Catalonia (UOC). Author of the book: Barcelona at the service of the New State Purges in the City Council during the first Francoism. Eumo Editorial, 2017. 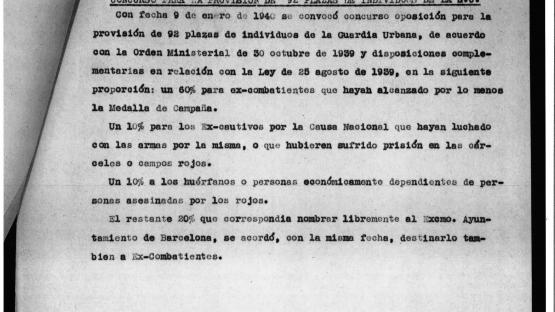 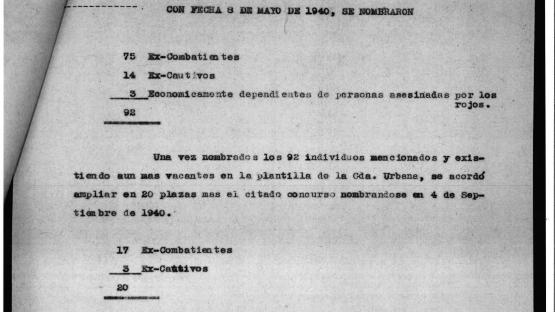