Conference: “Women on the move. Participation and gender in the city”

Conference: “Women on the move. Participation and gender in the city”

If you want to learn more about the feminist movement and the organisations involved, come to the conference on "Women on the move. Participation and gender in the city” next Tuesday, 5 February. 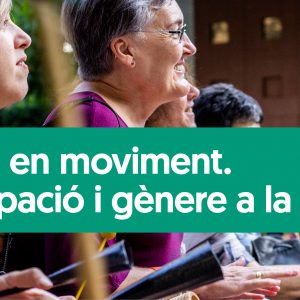 Women’s political participation in mixed institutional social spaces is crucial for the attainment of an egalitarian society. But what proportion of women make up Barcelona’s executive structure, governing body or governing councils? How are women involved? What tasks do they carry out? How do they defend and fight for women’s rights? What limitations do they face, if any, for the mere fact of being women?

In order to further examine these issues, on Tuesday, 5 February you are invited to the conference “Women on the move. Participation and gender in the city”.

The event will start with an institutional welcome delivered by Laura Pérez, Councillor for Feminisms and LGTBI. It will then continue with the talk “Anti-democratic inertias of institutional participation. Criticism and feminist proposal”, by Jone Martínez-Palacios, lecturer of Political Science and Administration (University of the Basque Country / Euskal Herriko Unibertsitatea) and member of the research group Parte Hartuz: participatory democracy studies.

This will be followed by a poetry reading by Maria Sevilla and a presentation of the results of the studies “Analysis of women’s participation in Barcelona’s mixed institutional and social spaces”, by Liquen Data Lab, and “Analysis of women’s participation, the feminist movement and groups or organisations working for gender equality in the city of Barcelona​”, by Almena Cooperativa Feminista.

At 6.50 pm, the Gender Mainstreaming Department will present the map of feminist organisations in the city, where the organisations that are committed to gender justice and equality can be located.

The event will be led by Laura Álvarez and Elena Herranz, from Barcelona City Council’s Gender Mainstreaming Department.

Music from a feminist playlist will play during the event.

The conference will take place on Tuesday, 5 February from 5 pm to 7.30 pm, in hall 3 of the Apolo concert hall (Nou de la Rambla, 115).
The event is free, but you must register in advance at: transversalitat_genere@bcn.cat
There will be a crêche service, which must be booked no later than by 2 pm on 1 February.

We look forward to seeing you there!

Further information:
Analysis of women’s participation, the feminist movement and groups and organisations working for gender equality in the city of Barcelona.
https://bcnroc.ajuntament.barcelona.cat/jspui/handle/11703/110570

Map of feminist organisations in the city
https://ajuntament.barcelona.cat/dones/ca/recursos-i-actualitat/mapa-dentitats-feministes