A Sant Jordi with many faces

A Sant Jordi with many faces 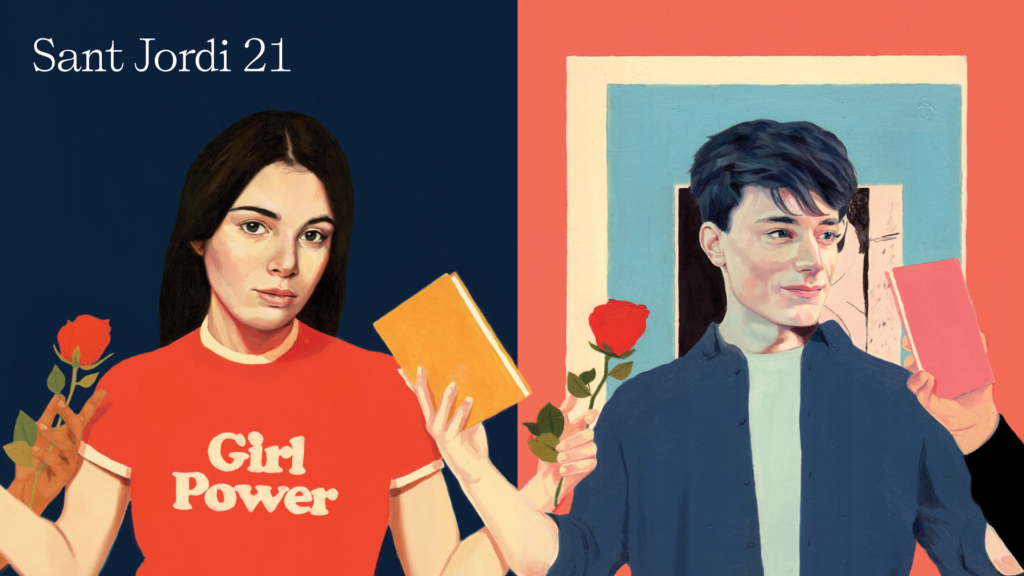 Sant Jordi returns to the city streets with a wide array of cultural activities around Barcelona’s ten districts, with all the current health protocols in place. This is a day for strolling around stalls of books and roses (ten spaces have been set aside with perimeters and controlled capacity), but you can also combine your walk with some of the activities offered by community centres, museums, libraries and other facilities. As this year’s celebrations for the patron saint of Catalonia also fall on a Friday, there are a number of related initiatives over the course of the weekend and the days to follow. Bookshops and florists can actually set up stalls in front of their establishments or the nearest possible space on 21, 22 and 23 April.

Here are just some of our picks from the long list of activities to choose from, all of which can be found on the website devoted to the day for books and roses: On the eve of Sant Jordi, the opening speech is being organised by the city’s library network. This year’s speaker is the writer from Zaragoza, Irene Vallejo, author of the acclaimed L’infinit dins d’un jonc. The opening speech can be seen on the City Council’s YouTube channel. On the same day, the Urgell community centre is offering a music and poetry show by the company Les Fugitives, entitled Dona foc, la dona que es crema, while the Jaume Fuster library is offering storytelling in English. At the Torre Llobeta community centre there’s another literary gathering entitled ‘Celebrem Sant Jordi. Els llibres que ens acompanyen’, organised by the Grup de Dones en Forma. On 22 April, the Sagrada Família community centre is offering music and poetry from the duo Althaia, and two days later there’s storytelling for young children at the same venue. Various organisations and facilities in the Poble-sec neighbourhood are organising a book search, the Cercallibres, from 22 to 26 April, while the Lleialtat Santseca is offering the Jardí Poetic on 23 April, a poetry performance in the form of a choral recital organised by the Col·lectiu d’Artistes de Sants and consisting of poetry and short stories evoking spring, where flowers take centre stage. Also at La Leieltat, there’s a visual concert on 23 and 24 April by B-A-F, a group of women artists devoted to creation in different disciplines.

On the afternoon of 23 April, La Fontana youth centre will be setting up a microphone outside so that anyone who wants to can share verses, songs and short narratives. In Plaça d’Herta Frankel there’s a show by three women clowns and local people entitled Un embolic de nassos, and at the Casal Mas Guinardó you can enjoy a family concert from Punkgrossos. The Can Basté community centre is organising a special recital for Sant Jordi, to discover the creative universe of young talents. At the Institut Barri Besòs there’s also a gathering of rumba musicians from Catalonia and northern Catalonia (in France), organised by the Besòs community centre with the collaboration of the Pyrenees–Mediterranean Euroregion.

On 24 April, you can take part in the route ‘Bolaño, vuelve a casa’ (advance booking required), organised by the Vilapicina library and the Torre Llobeta, or the route ‘De Marsé a Mercè’, around the neighbourhoods of El Carmel, Can Baró and Guinardó. The Museu Frederic Marès is offering the guided tour ‘Un museu de novel·la’, a stroll allowing visitors to relate works of Catalan literature to a selection of pieces from the collector’s section at the museum. On 24 April, La Cadena community centre is the scene for the show Amb “P” de Poesia, by Poeta K100, while the popular culture centre La Violeta, in the Gràcia neighbourhood, is offering a chance to discover the music project with a feminist perspective Alérgicas al Polen. Elsewhere, in the courtyard of the Nou Barris district office there’s sardana dancing, a concert by the Banda Simfònica de Nou Barris, havanera singing by the group Mar i Vent and a finale with the Nou Barris fire group as part of the Aplecat popular culture gathering. If you like writing, the fourth edition of the Plaça de les Glòries speed literature competition is being held at the Clot – Josep Benet library on the morning of Saturday 24 April. In the afternoon, the Parc Sanderu community centre is offering a concert by Bertran Swing Band and Jam en Vers, while the auditorium in Sant Martí will be offering the show La llegenda de Sant Jordi, by the Grup de Teatre Alisos. At the city’s history archive, the original documents on display in the foyer in April are examples from Don Quijote, by Miguel de Cervantes, the oldest of which dates back to 1755. On 22 April, the archive will also host the presentation of the book La bullanga de Barcelona, by Jordi Roca Vernet and Núria Miquel Magrinyà, which can be attended in person (registration by email to arxiuhistoric@bcn.cat) or followed on the AHCB YouTube channel.

Ten open-air fair venues are being set up around the city on the day of Sant Jordi and run by booksellers’ and florists’ guilds. The goal is to reduce travel and to ensure that people can celebrate Sant Jordi safely, close to home and free of crowds. The venues will be open until two hours before curfew.

The fenced areas will have a limited capacity, with separate access and exit points and all the health protocols from the authorities in place. Unlike other years, and to avoid build-ups of people, only professional florists can operate stalls and there will be none by associations, organisations, political parties etc.

The fairs will be in:

In addition, there will be book and rose stalls at each end of Plaça d’Orfila (Sant Andreu), but with no perimeter fence in this case.

In short, a festive day which invites people to get out into public space, but with online activities also available. Full details for Sant Jordi 2021 can be found here.