The BCNegra goes to La Rambla

The BCNegra goes to La Rambla 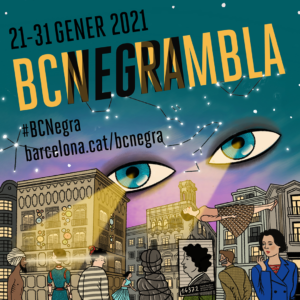 In a particularly difficult year, the BCNegra festival wants to vindicate culture as an essential element for society. It will do so by recovering one of the most emblematic and literary streets of the city: La Rambla. For a few days, it will become “La Rambla Negra” (The Black Rambla). The 16th edition of the festival will take place from the 21st to the 31st of January. Curated by the writer Carlos Zanón and produced by the Institut de Cultura de Barcelona, ​​the program has had to adapt to the new reality due to the health situation. For this reason, the city will receive the most important authors of the genre, nationally and internationally, but will not be able to meet in person with its readers. Yes, they will do so virtually: all the events can be followed live on the BCNegra website and also on the Barcelona Cultura website.

There will be more content than ever: 119 authors, of which 17 will connect remotely; 40 moderators, in a total of 52 round tables, distributed in 10 days of intense programming. One of the characteristics of the event is that it is not limited to the novel format, and this 2021 you will also find poetry, comics, photography – with the exhibition Directe als ulls. Retrats d’Ana Portnoy -, music – with performances by Josele Santiago and Tori Sparks -, cinema and a literary route along La Rambla that can be followed in podcast format. There will also be pairings between Music and Literature – with the Manual de supervivència, homenatge a Boris Vian by Lluís-Anton Baulenes – or the search for the darkest poems in Josep Mª Fonollosa and Gerard Vergés’ poetry recited by Josep Pedrals and Laia Alsina.

As in every edition, BCNegra recovers an author, who in the 16th edition will be Fred Vargas; a book: The City and the City of China Miéville, a writer who travels the fantasy and science fiction genre; and as for the character, the chosen one is Laidlaw, who is part of the narrative of the considered father of the Tartan Noir, William McIlvanney. The centenary of the birth of writer Patricia Highsmith will also be commemorated.

During the BCNegra, specifically on January 25 at 5 pm and in the Saló de Cent of Barcelona City Council, the Pepe Carvalho 2021 Prize will be awarded to the writer Joyce Carol Oates.

Check all the details of the program on the festival website.