Barcelona Restaurant Awards 2018.. They were the winners chosen by the jury out of the thirty or so Barcelona restaurant establishment finalists for the 2018 edition of the awards.

As many as 30 establishments from all the city’s districts ended up as finalists at the second edition of the Barcelona Restaurant Awards. The awards ceremony for the three winning restaurants was held on Monday, 18 February, at the headquarters of the old Damm Factory, hosted by the chef and TV3 presenter Marc Ribas.

The awards are for recognition and an initiative for promoting restaurants all around Barcelona’s neighbourhoods. They highlight and lend recognition to restaurants for their quality and service as well as their development as a business, as pointed out by the Councillor for Tourism, Commerce and Market, Agustí Colom.

The jury decided to award this year’s prize in the ‘Food Quality’ category to the Sants Montjuïc district’s ‘Granja Elena, for ‘representing haute cuisine in the neighbourhood’. With 45 years of service behind it in Passeig de la Zona Franca, Granja Elena has been steadily making its way. First, because during the mid-1970s and start of the 1980s, things were complicated in the early days for this Passeig de la Zona Franca establishment, remarked its manager, Borja Sierra. The improved quality of life later seen all around the city, following its transformation in connection with the Olympic Games, helped to establish the place, a feat that also had something to do with the good relations it has been able to build with its customers through its food.

The award in ‘integration in the neighbourhood’ category went to the Sarrià-Sant Gervasi District’s ‘El Tomàs de Sarrià’, for ‘being a Barcelona district and city heritage with 100 years of history’. ‘El Tomàs de Sarrià’ is famous, above all, for its patates braves dish. A century of history and a true Sarrià and Barcelona institution. An example, as cited by the awards’ jury, of a restaurant’s good integration into a neighbourhood.

The award in the ‘famous or innovative premises’ category went to the Ciutat Vella district’s ‘En Ville’ restaurant, for its commitment, as the jury put it, ‘to meeting a nutritional need with a 95% suitable menu for coeliacs’. ‘En Ville’ is a very young enterprise, with five years behind it in Ciutat Vella. An establishment that is concerned with the nutritional conditions of its customers, including coeliacs, emphasises Mariona Rubio, the maître d’hôtel.

Finally, the jury for this edition and year unanimously decided to award special recognition to a restaurant with over a hundred years of history behind it: ‘Can Recasens’, in the Sant Martí district, for its 113-year career and culinary contributions to the Poblenou neighbourhood. The family that runs the place highlights good treatment of customers, above all, as the key to its continued existence to this day. 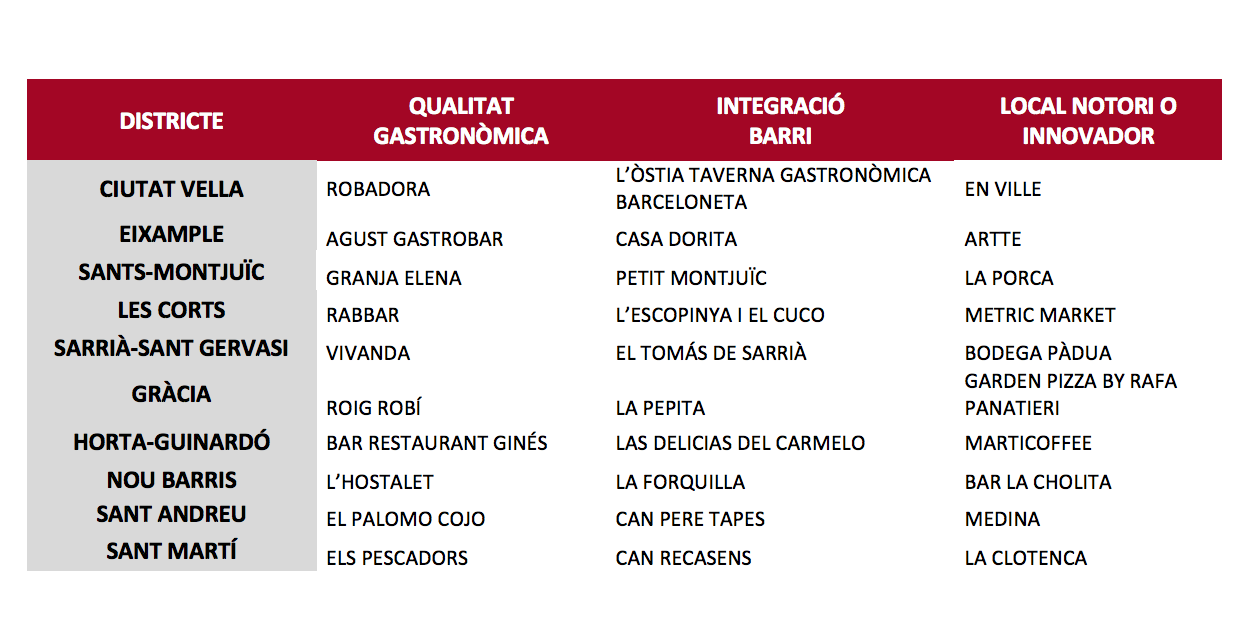