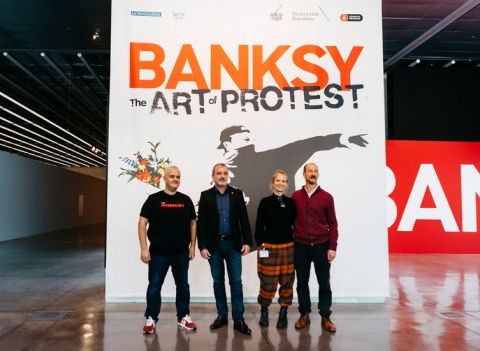 Alexander Nachkebiy: "Banksy is one of those people who give us a chance to think that we have a bright future"

Alexander Nachkebiy is the curator of the new exhibition at Disseny Hub, ‘BANKSY: The Art of Protest’, which brings us closer to the controversial artistic universe of one of the most influential creators of the last few decades through different themed sections and more than 70 creations. At En Primera persona we talk about Banksy, his art and artistic activism. From 12 November to 13 March the exhibition will reveal new clues about the mysterious artist, highlighting his most important pieces and framing his extraordinary and often controversial career.

What is your professional history as an art curator?

This is actually the first exhibition I’ve curated, and I honestly was not and am not totally professional in art, to be honest with you. I am a Banksy fan who, year by year, was communicating with people, and I became kind of a little bit of a professional on Banksy’s career, so that’s why I’m curating this exhibit, because I know people who know people – and through my company we’re producing art exhibits, we did Warhol, we did other projects, and we have a lot of other projects in the future.

Who is Banksy as an artist?

Banksy is a contemporary artist and it’s really hard to define his direction. I think Banksy is a new model of an artist, because I think currently, in the modern world, it’s not enough to be just a good artist, you also need to know how to communicate, how to present your art to people, so in that sense Banksy is a new model of artist. He’s an opinion leader, he’s great at marketing, because whatever he does is surrounded by marketing and PR campaigning, and all the headlines in all the newspapers all over the world are about Banksy. So, in that sense he’s a new model of artist, and that’s why it’s really hard to answer the question. My answer would be that he’s somewhere in his own direction, and his own direction would be a new model, a new generation, of artist.

How would you describe Banksy’s art?

I think it’s simple, clean, clear, and very timely, because, you know, Banksy pieces do not just appear randomly, they appear on time, so when something is happening, Banksy responds. And it’s very important that he somehow monitors the news agenda, and he picks up the topics which are really interesting to the majority of people but in their everyday life they just pass them by, but Banksy somehow manages to draw attention to those problems, those topics. So, Banksy’s art is clean, clear, timely, nicely marketed, and if I may say this, it somehow falls into your heart.

A lot of times people ask me “What is street art? – What is art and what is vandalism? What is the difference?” And my answer to that is that if you look at the image on the wall, and if it speaks to you, if it speaks to your soul, if it speaks to your mind, then it’s art. Because this is what all art is about, right? If it doesn’t give you anything except irritation, and you don’t understand what’s going on, then that’s vandalism. So, in that sense Banksy pieces are pure art, because they all have meaning, they all have multi-layered meaning, they all have this effect, they’re very timely, it’s always on time, in the right place, at the right time, and with the right message.

What will visitors find when they enter “BANKSY. The Art of Protest”?

I’m hoping that the visitors will be really amazed by the scope of Banksy’s talent, because most people usually think of Banksy as a street artist, a pure street artist, who just does stencils in the streets. So now, when people come to our exhibition, they suddenly find out that he’s a real, contemporary, very important, very talented artist who does his pieces not only in the street but also in the studio, who does canvases, who does prints, who does sculptures … Now people will also find out about his protests, about his position, about his opinion on different topics, because Banksy is all about protest, and we are dividing the exhibition in a way that we present the topics of his protests – the protest against consumerism, the protest against police actions, the protest against militarism, and the other topics – but mainly so people will come and see the reason for or the nature of his protest.

The important thing is that this protest is not aggressive, it’s very ironic, and that’s what gives it an additional power. I think this is the power of Banksy. So, I want people to come and see that Banksy is a serious contemporary artist. I want people to come and to understand that Banksy is a very educated person, very, very well educated, and I want them to come and see Banksy’s very strange British humour, because all his pieces carry a lot of humour.

There’s a big need, so to speak, there’s a big interest in Banksy around the world. And what we do want is for people to know the artworks and know about Banksy, but they have limited information and they have never seen … because you know that the lifespan of Banksy pieces in nature is very short – the second he does something in the street, the next second his artwork is covered over or painted over or cut off the wall. So basically, an exhibition like ours is the only place where people can see genuine Banksy artworks – not replicas, not some kind of interpretation, but genuine artworks.

How does a graffiti artist come to be in a museum?

I think here I would answer with Banksy’s words, that a spray can gives young people an opportunity to express themselves. The young generation have a lot to say, because the future is theirs. So, I think expressing themselves through art is really, really important, because it gives them an opportunity to draw our attention to some problems, to some theories, to something they might not tell us otherwise. And, graffiti and street art came into the museums a long time ago, a long time before Banksy, I think Keith Haring was the first one.

And I think that at this moment Banksy is doing a very serious and very important transition – he already made the transition from the street to the gallery, and now he goes from the gallery to the museum. Because this transition means that people who collect Banksy pieces would not be, so to speak, value-oriented, but people who would want to buy his pieces for their collection, which means that he transfers to another level, a level of heritage. And that is a very important step, and without going into the museums it’s impossible to do.

So, I think that we’re now looking at a very, very interesting moment in Banksy’s career: this moment will define, in thirty, fifty years, whether somebody will say either “Banksy, who was that?” or “Oh Banksy, yes!” because he’s a classic figure.

What role do you think graffiti plays in a certain sector of youth and in society in general?

I would say that there are people who know that something is wrong, but they can live with it, and there are people who have, so to speak, a wound in their souls that doesn’t allow them to just look on, they have to do, they have to help, they have to react, they have to do something. Those people are the ones that take this world to the next generations and take this world to the future. Some of us may donate our money and so on, but activism is actually very important because it doesn’t allow us to relax and enjoy life, because the further we go, humankind, the further humans live on this planet, the more we are, the more we feel connected to each other.

How would you define artistic activism? The presence of graffiti in our cities is a constant theme of debate. Some people think it “dirties” the streets and others think we have to accept and protect it. What’s your opinion?

If history teaches us anything, I think the lesson is that it’s not possible to control artistic and cultural exchange or development. Imagine if tomorrow we collect all the graffiti artists in Barcelona and tell them “Hey guys, starting from tomorrow you draw on this wall and you don’t draw on that wall,” what would they think? They would think it would be a signal to them to draw on that wall and not draw on this wall. Because the nature of their art is protest. And this is very important to understand: the nature of graffiti, the nature of street art, is protest. So, I think it’s important also to understand that we cannot control this. What we can do is understand what art is and what is just vandalism. When somebody draws or writes something stupid on a wall, that is not art. Because graffiti and street art are a combination of several principles. And it’s important that people – regular people, not graffiti artists – understand this.

As in any society, there’s a conflict, and the conflict is all about ignorance. So our exhibition aims to give people information about activism, about Banksy, about graffiti, about street art, about protest and everything. So in a sense, we educate those people who’ve never stencilled in their lives, who’ve never taken a spray can in their hands, but they come, they will look at the artworks, and they will think “Oh, maybe the picture I saw from my window is not just vandalism, maybe it’s an art piece, maybe it means something.” This is the only way things should be developing, I think. We cannot limit any more, those times have passed, a long time ago. We can just educate ourselves so that ignorance goes away, and the more we know, the more we want to know, and the more we understand. 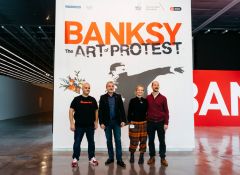 Alexander Nachkebiy: "Banksy is one...

Alexander Nachkebiy is the curator of the new exhibition at Disseny Hub, ‘... 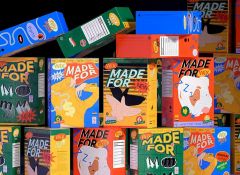 Training and creativity with Wix Playgro...

On 12 November, the Disseny Hub Barcelona will be the setting for... 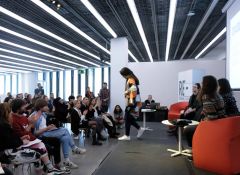 Presenting the projects for the Sustaina... 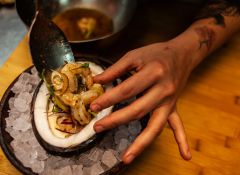 Healthy and accessible food, the economic opportunities of the territory, and the climate emergency of global threats will be the central themes...