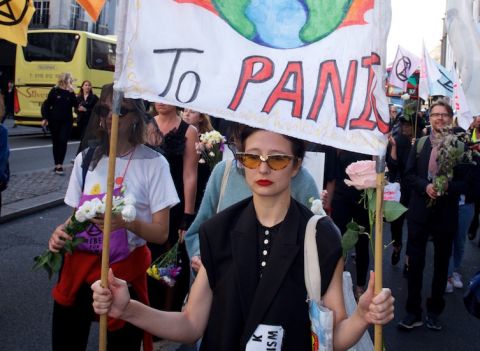 Sara K Arnold studied fashion design at Central Saint Martins, however concerned for the environment, made the decision not to partake in the production of clothes. Instead, she set up the fashion rental platform Higher Studio, to incentivise creativity and circular economy. Since November 2018, Sara has been part of Extinction Rebellion, an environmental activist movement that demands meaningful action on climate and ecological collapse. There she coordinates actions challenging the fashion industry.

We talk to Arnold as one of the speakers of Re-Barcelona, an international forum on the sustainable and ethical fashion industry, holding its first edition at the Design Hub Barcelona next November 29 and 30.

You are founder of Higher Studio, a high-end fashion rental company. What lead you to this?

I graduated from Saint Martins in 2012 and after this went to business school. Here I realized that through rental, you can start to incentivize production for longevity instead of planned obsolescence. This is because if the garments last longer, than you earn more from them. Whereas in fast fashion, companies profit from fast moving trends.

Why should we encourage creatives to design in a circular way?

Because if we don't, we might be heading to a complete catastrophe. Currently, less than 1% of clothing in the fashion industry is recycled into new clothing. It's a massive problem: we are extracting a huge amount of resources from the environment, we are overproducing, over consuming those items that are going into landfills. It's predicted that the fashion industry will grow by 63% between now and 2030, adding two degrees of warming, and this is a very dangerous amount. With our planetary boundaries, we can't do it.

You have recently taken part in a panel discussion in London, named "Does The Fashion Industry Care About Our Future?". Does it care or not?

It does, but in the wrong way. When companies talk about sustainability, the majority are talking about their own businesses rather than sustaining life on Earth when it is under threat, as it is right now. To make that switch, we need to start talking about producing less, or the degrowth of our economy. We need legislative change to make the differences that we need if we're going to meaningfully mitigate. The priority then is how we create the political will and the political culture needs to lead the way to that. That is what fashion industries are not doing as they could. It is a missed opportunity right now. We have the solutions, but we don't have the political will.

One year ago you joined Extinction Rebellion. What is it, and what is your fight?

Extinction Rebellion is a decentralized holacratic movement. We are aiming to get meaningful action from our governments. We have three clear demands. The first one is that the government tell the truth about this crisis. The second one is that they act now, and that means getting to net zero carbon by 2025 and halting the loss of biodiversity as quickly as possible. Our third demand is that we get beyond politics. We have a citizens assembly within the government that decide on climate and ecological justice issues. Essentially what we're saying is that our political system is failing to deal with this. The main tactics we use are direct action and civil disobedience. We believe that the time has passed to use kind of less drastic forms of action.

You once said that change in the fashion system “cannot be industry-approached”. Then, how?

Given the level of emergency that we're at now in, and given that we're running out of time very quickly, I don't think change from within the fashion industry as known can get us to where we need to be. We need systemic change from our governments, and we need systemic change also, not just on a national level, but on a global level. As a cultural powerhouse, the fashion industry can play a pivotal role in creating the culture of change. If it does, then the world will start understanding how much an emergency it is.

It seems like society is now more willing to acknowledge fashion as a multibillion dollar industry and also be more aware of its environmental footprint. But why do you think this conversation is still silenced by the powers that be?

In the UK, there is the Environmental Audit Committee, which is part of the government, and they put together very common-sense recommendations for the government, like getting rid of the VAT (Value Added Tax) on repairing clothes. The government rejected all of them. Why? Because of businesses, I think. In the UK, we have businesses such as Boohoo or Misguided, which are ultra fast-fashion brands. These kind of policies will mean they would make less money. This is why we need to get beyond politics and give the power back to the people. It all comes back to our economic and political systems. They aren't made to deal with this crisis, but to make money.

This Friday is Black Friday, but there’s also the ‘Buy Nothing Day’, a protest against consumerism. Why should people join the latter?

It is also the Global Strike 4 Future, which would be the last local school strike before COP25. It is the most inappropriate day to be celebrating consumerism. Black Friday is a symptom of overproduction and overconsumption. We've produced too many clothes and so we discount them so that we can sell them. It's important to make a stand against Black Friday. Obviously, some people might be buying essential things that they can't normally afford. But if you're using Black Friday to buy things that you don't need, then you should really consider that. Also the brands that are taking part in Black Friday should consider producing less instead of discounting.

Re-Barcelona is the first global gathering of sustainable and ethical fashion in Southern Europe. Was a venue of this kind missing?

Yes, because we just had the Copenhagen Fashion Summit until now. It is really important that we are talking about recycling, upcycling, circular economy, but we are also talking about the societal impacts of the fashion industry and how that can help solve wider issues. 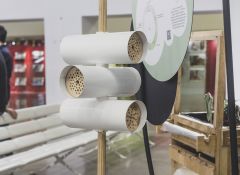 Since mid-December, and on the occasion of the temporary exhibition ... 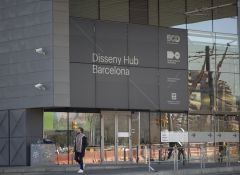 Coming up at the Design Hub this 2020

2020 started and the Design Hub Barcelona faces a broad program of exhibitions, activities and festivals... 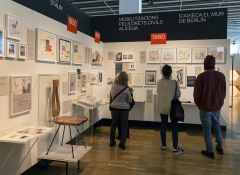 Final stages of the temporary exhibition... 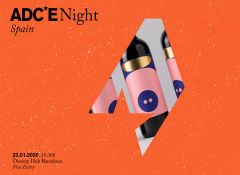 The ADC*E Night brings together the best...

Just a few months ago we hosted at the Disseny Hub Barcelona the sixth edition of the ADCE European Creativity Festival, the contest...