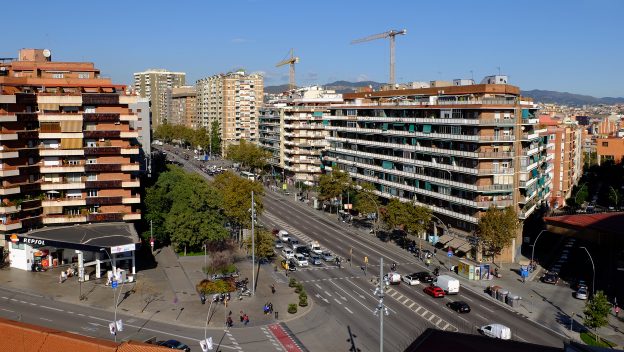 The new regulation aims to reduce the inconvenience caused by these facilities in order to improve environmental quality and foster the city's energy transition.

Barcelona City Council has initially approved a special urban plan to regulate the introduction of supply installations (filling stations) for vehicles in the city.

The desire to regulate this activity is also a response to the profound structural changes Barcelona is undergoing in terms of mobility, including international commitments regarding reducing emissions, progressive restrictions on the circulation of the most polluting vehicles (Low Emissions Zone - LEZ), the emergence of electric vehicles, the increased distribution of urban goods, and the increased use of bicycles and other personal mobility vehicles, among others.

The plan aims to limit the introduction of new filling stations in three specific areas:

Neither can they be installed on protected properties or buildings, nor within 100 metres of certain facilities.

Integration with the surrounding area

The new regulation states that these installations should be integrated into their surrounding areas, with the aim of minimising the visual impacts. Hence, their design, colour, and style of signposting and advertising must be in consonance with the surrounding buildings.

Their surface area can be up to a maximum of 3,000 square metres. They can have only two storeys and be no more than 9 metres high. The sales area is limited to 100 square metres, with products connected to the facility’s main activities. Catering services are not permitted.

A participatory process has been approved regarding this PGM amendment in order to provide and disseminate information on its goals, as well as promote public debate on the issue.

The participatory process will encourage new voices that will bring plurality and diversity to the debate, and will enable us to gather the general public’s suggestions and concerns.

The territorial scope of this debate includes the entire City of Barcelona.

The participatory process will be debated in two different forums:

Sectorial organisations: public debate aimed at any of the city's sectorial organisations which may have a special interest in the matter, calling on member organisations of the Mobility Agreement, the Anti-Pollution Committee, the LIVE Platform, the FAVB, and private fuel supplier groups. It will also include local resident representatives from the neighbourhoods that are most concerned about the impact of this activity.

Participatory actions: aimed at opening up the process in both the informative phase and the proposals and feedback phase. More specifically, a leaflet will be produced and distributed to the city's supply installations, and an email address (procesparticipatiu@bcn.cat) will be set up so that city residents are able to contribute with proposals and suggestions regarding this municipal initiative.

Care will be taken to include all the people, bodies, organisations, and groups that will ensure that the plurality and diversity of city residents and the social, economic, and neighbourhood fabric of the city are represented in the debates and reflection that form part of the participative process.

The responsible administrative body shall be the Communication and Participation Directorate of the Manager's Office for Urban Ecology at Barcelona City Council.