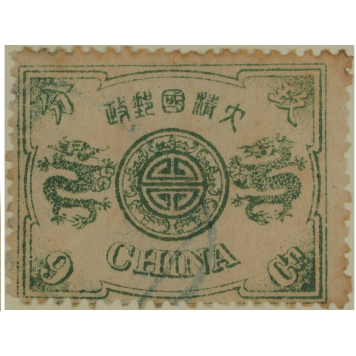 The Chinese stamps and the Marull collection (I)

China’s official postal service, like Europe’s, dates back to before modern times. The government’s post offices are as old as the Empire itself, and they were developed and consolidated in tandem with the efforts made by the country’s successive dynasties...

China’s official postal service, like Europe’s, dates back to before modern times. The government’s post offices are as old as the Empire itself, and they were developed and consolidated in tandem with the efforts made by the country’s successive dynasties to create a centralised administrative system with control mechanisms that were sufficiently powerful to cover what was a vast land area. Many written documents from that time speak of the crucial importance of possessing an efficient communication network between the capital and the furthest-flung corners of the Empire. Furthermore, in the 7th century, a ministry was created for the exclusive purpose of monitoring and issuing imperial edicts. Then in the 13th century, with the advent of the Yuan dynasty of the Mongols, the regular postal service was improved following the adoption of the Mongols’ postal relay system. This was first introduced by Genghis Khan, who was the grandfather of Kublai Khan, the dynasty’s founder. This official service continued virtually unchanged until the last days of Imperial China, in 1912. For private communications, apart from the common practice of asking friends and business contacts to deliver mail when they went on journeys, in the early 15th century private postal agencies were created in China – min xin ju (民信局). According to this system (which continued to operate until well into the 20th century), the sender would pay half the postage, and the rest would be covered by the addressee. The min xin ju system reached its zenith in the southern coastal cities during the 19th century, when it became the most commonly-used form of contact between the Chinese who migrated to America to work as cheap labour and their families back home in China.

Illustration of a postman for a private mail company, 19th century. Source: Wikipedia

This situation changed markedly at the beginning of the 19th century, when the Western powers burst upon the scene in China. After the first Opium War (1839-1842), the Treaty of Nanking forced the Imperial government to hand over Hong Kong to Great Britain, and to open up four ports (Shanghai, Amoy, Fuzhou and Ningbo) for trade with Europe and the United States. The foreign trading companies that set up offices in the Treaty’s ports all used the postal agencies that their countries of origin created in these cities. The British were the first to do so: the Royal Mail opened its first office in Hong Kong in 1841, and three years later it opened further offices in the Treaty’s four ports and in Canton.

The second Opium War (1856-1860) consolidated the colonial penetration by Western Europe and the United States into China. The opening of 10 new ports to international trade, the granting of free shipping to foreign vessels on the Yangtze River and the establishing of foreign diplomatic delegations in Peking all necessitated the introduction of the Western model of postal system, and the creation of post offices by each overseas power in those cities in which it had trading interests.

Thus, in the second half of the 19th century, a particularly complex scenario existed – on one hand, there were the Chinese postal services (the government service and the private companies), and on the other, the postal services of the foreign nations, as they expanded relentlessly across China. This complicated situation was a result of one of the most turbulent periods the country had ever experienced, what with the systematic looting by the West, internal conflicts and the slow death of China’s political system.

Postage stamps, meanwhile, were first used in China in the 1860s. The foreign residents were the first to use them (stamps from their own countries of origin, with surcharges), though two decades later the autochthonous population would follow suit with their own national Chinese stamps (known as Candarins), which the Imperial government first issued in the 1870s. The Ramon Marull Collection contains a comprehensive selection of items from this period: it starts with English stamps from Hong Kong when it first became a British possession, continues with the earliest Chinese stamps and the ones used by the postal agencies of each of the colonising countries (Great Britain, Germany, France, Russia, the United States, Italy and Japan) and ends with the stamps of the Republic of China, proclaimed in 1912.