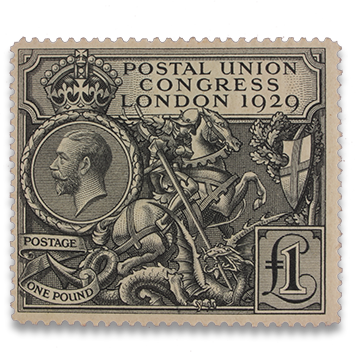 Among the millions of stamps issued, only a few have their own name. As an instance, there is the Penny Black, the Maurici, the Guiana, etc. One of the most beautiful stamps is the Pound Black, a big sized stamp...

Among the millions of stamps issued, only a few have their own name. As an instance, there is the Penny Black, the Maurici, the Guiana, etc. One of the most beautiful stamps is the Pound Black, a big sized stamp issued in occasion of the 9th Universal Postal Union Congress, which took place in London, in May 1929. The stamp can be seen in Ramon Marull’s collection.

Curiously, its release was a protocolarian question. British Post’s initial project was to issue four stamps of ½, 1, 1 ½ and 2 ½ pennies, with King George V’s portrait in a medallion, upon a background with the British flag. The stamp had the same size than the ones with low prices of the general series which were in circulation at that moment. All this in consonance with the then very stern British policy of stamps issue.

The problem arrived when they noticed that in these occasions the tradition was to give to the assistants to the Congress the event’s commemorative series as a present. Englishmen thought that it was inadequate for the most powerful Empire of that moment to give only five pennies and a half as a present to their assistants. That was why it was hurriedly decided to add a very high facial stamp (a pound sterling) to the series. And what could be better than to represent Saint George, Saint patron of England, together with the philatelist king’s portrait? This would also allow to obtain additional incomes from the collectors which would be very useful to finance the congress.

At the technical level, the series was printed engraved at Bradbury & Wilkinson & Co workshop, in sheets containing 20 stamps, with a comb perforation of 12, and with a watermark with GVR crowned as monogram. There were issued 61.000 copies. There were also issued some stamps without perforations in cards of four copies as a test.

Despite of the rush, the artist, illustrator and engraver, Harold Nelson (Dorchester 1871 – London 1948) did an excellent work. The stamp is considered one of the most beautiful stamps ever issued and it is compared to its mythical predecessor, the Penny Black.

The history of its origins and its thematic make of it a much desired stamp, not only for the numerous British stamps collectors, but also for the Saint George’s thematic followers, who are a legion in Catalonia. The pity is its price: 600 euros if it is new or 400 if it has been used (January 2013), which makes it beyond the reach of most collectors. 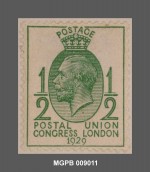 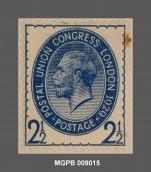 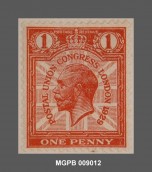 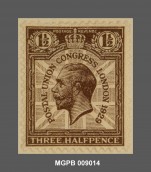