Dolors Palau was born in Poblenou on 27 November 1893. She studied teaching and competed for a teaching post at the Montjuïc Park Municipal School, the first outdoor school in Barcelona. It opened on 8 May 1914 with two sections, one for boys and the other for girls. Rosa Sensat was in charge of the latter. It was through Rosa that Dolors Palau came into contact with the pedagogical renewal movement and the ‘new school’ educational trends that were arriving from Europe and establishing a place for themselves in Barcelona.

Years later, Dolors Palau was appointed head of the Guinardó Park School, which opened in 1923. A significant influence on her in the pedagogical field was her husband, Antoni Riera. Riera, who she married in 1920, was also a teacher, heavily involved in the educational renewal trends and in contact with various educational centres across Europe where new ideas were being developed. The Decroly and Montessori methods inspired the Guinardó school thanks, in part, to Antoni Riera, even though he never held an official post there. They also used the Dalcroze method for musical education, especially rhythm, which so characterised the school. The couple travelled to various countries, especially Switzerland, in search of new techniques and material.

Under the Franco regime’s Education Act, passed on 17 July 1945, local and provincial councils were no longer allowed to run schools. That posed a serious threat to the municipal schools run by Barcelona City Council. However, the resistance shown by the mayor, Josep M. Albert, and Tomàs Carreras Artau, who chaired the Culture Committee, despite both being close to the regime, helped save the schools, which the State recognised as
Special Schools.

Classes at the Guinardó Park School had to be taught in Spanish, but in practice, Catalan ended up being the language used.
This school gained its excellence by skirting round the impositions enforced by the two dictatorships that the country experienced during the twentieth century. The people who basically steered the ship during that difficult voyage were Dolors Palau and Josepa Català, two teachers who relentlessly drove the municipal school for forty years.

Dolors Palau retired in 1965. She was succeeded as head of the school by Ms Galceran, one of the pioneering teachers in 1923 and a woman of stern character. Dolors Palau lived until 102 years of age. 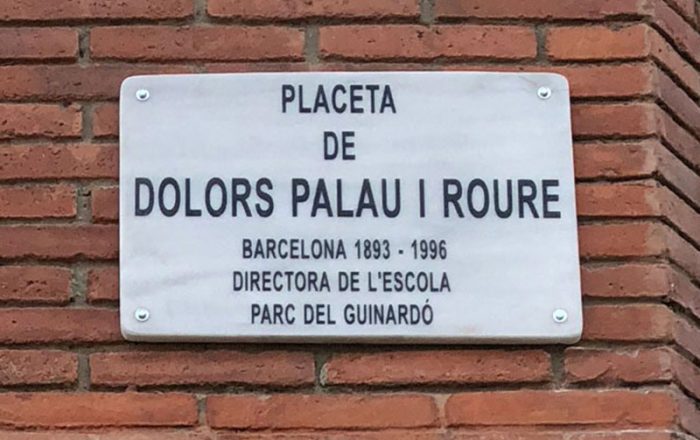