As part of International Holocaust Remembrance Day, the Saló de Cent chamber at the City Hall hosted its first ever ceremony in memory of the eleven million victims of Nazism.

Nazism didn’t just murder six million Jews. Roma people, homosexuals, people with disabilities and objectors also suffered the effects of Adolf Hitler’s doctrine, elevating the overall number of deaths to eleven million. Barcelona City Council and the Government of Catalonia organised a remembrance ceremony again this year, with representatives from communities of Jews, Roma people and homosexuals, as well as relatives of those murdered or deported.

The song Arvoles yoran por luvyas, a Sephardic piece sung by Spanish Jews in the death camps, opened the ceremony in the Saló de Cent before the lighting of seven candles of remembrance.

Each of the candles paid homage to different groups. The first to the six million Jews murdered by the Nazis. The second in memory of the Jewish resistance, and the third for the million and a half children who suffered the Nazi barbarity. Three more candles pay tribute to the victims among the Roma people, the republicans deported to the concentration camps and all the other groups who suffered the persecution. Finally, the seventh candle remembered the ‘Righteous Among the Nations’, men and women who risked their lives to save Jews being persecuted.

The lighting of the candles signalled a minute’s silence for the victims of the Holocaust, the reading of texts, and performances of Gelem Gelem, the anthem of the Roma people, and El cant dels ocells. 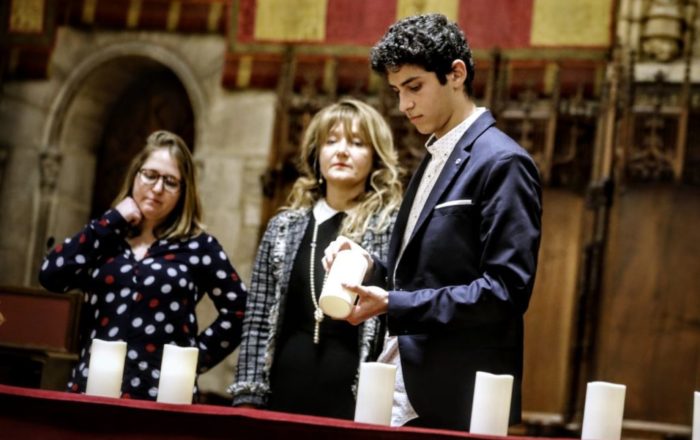