The riot was started by the women and from them it spread to everyone else.

On 28 February, 1789, the government published an edict announcing it was increasing the price of bread and posted it on the city’s street corners. The same day, women demonstrated from Pla de la Boqueria to this square, Plaça de Sant Agustí, attacking any stalls selling bread. When they got here they set fire to the baker’s house, where bread was baked for the whole city.

The following day some 8,000 people took part in the protest demanding a reduction in the price of basic necessities: bread, meat, wine, oil, etc., and the dismissal of the Captain General, Francisco González de Bassecourt, the first Count of Asalto. They occupied the streets and the area round the institutions: the Captain General’s Palace and the Cathedral. The troops reacted firmly and a considerable number of people were arrested.

Josefa Vilaret, nicknamed “La Negreta” and a mother of two children, was hung from the gallows alongside five men, all accused of taking part in the riots. The citizens of Barcelona did not go to watch the execution of the six people condemned to death, a gesture which showed they did not agree with the sentence. 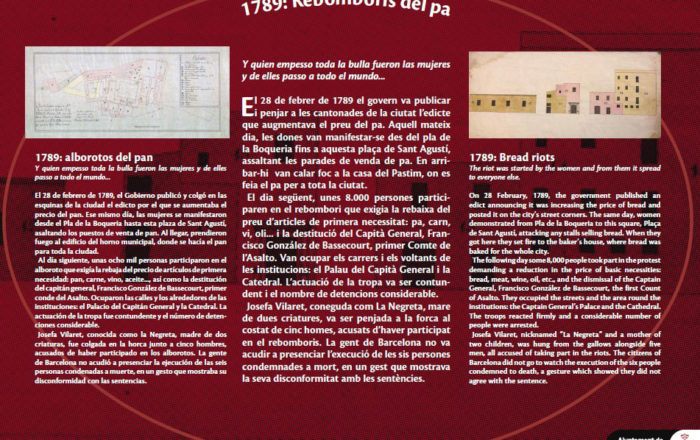