Casa Bloc was designed during the Second Republic (1931-39) with the aim of creating a new model of housing that would improve the living conditions of working class residents. After the Barcelona International Exhibition of 1929, the city and whole country sank into a serious economic crisis that increased unemployment and heightened various social problems. This could be seen from the lack of planning across all social areas and the low sensitivity shown towards the real needs of people.

However, the proclamation of the Second Republic gave a boost to new policies based on equality and social justice. It was in this context that the Catalan government started work on a new building in Sant Andreu to offer working class families functional housing in the face of the massive shortage resulting from a wave of migrant workers looking for work in Barcelona’s industries.

The body commissioned with designing the project was the Group of Catalan Artists and Technicians for the Progress of Contemporary (GATCPAC), which was set up in 1930 with the goal of bringing Catalonia rationalist and modern architecture from Europe, while attempting to resolve serious social issues. And so, it was on 13 March 1933 that President Francesc Macià laid the first stone of the Casa Bloc, to be built by the Institute Against Forced Unemployment (ICAF), which would offer jobs to unemployed workers.

Formed by five blocks in the shape of an ‘S’, the building optimised natural ventilation and light in its 207 duplex flats measuring between 55 m2 and 77 m2 in area. These had a ground floor with living room, dining room, kitchen, toilet, shower and terrace, and three bedrooms on the upper floor. The building’s ground-floor premises were intended for community facilities: swimming pools, gardens, nurseries, working men’s clubs, libraries and consumer cooperatives.

The building was disfigured during the Franco dictatorship, with the addition, in 1948, of a “phantom block” in the communal area, to house families of policemen. The south wing was intended for the widows and orphans of soldiers. 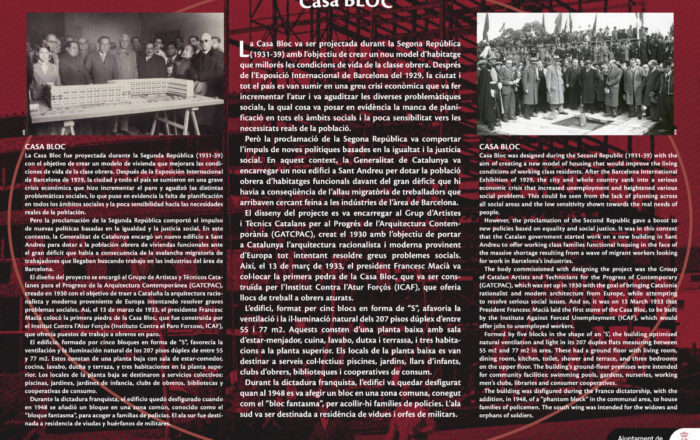