In the 1930s, Barcelona’s 5th district (now Ciutat Vella) was plagued with serious health issues, as well as an alarming demographic concentration. Overcrowding and an outdated urban distribution brought the neighbourhood high levels of degradation, poverty and a high death rate.

Given this reality, the Republican authorities arranged for the construction of the Dispensari Central Antituberculós [Central Anti Tuberculosis Dispensary] in 1934, as part of a programme for socialising healthcare and fighting against the venereal and lung diseases that were wreaking so much havoc. The aim was to respond to the district’s health issues while acting as the driving force for transforming a very run-down area.

The Dispensari Central Antituberculós is considered one of the masterpieces of European rationalist architecture. The project was launched by the Catalan regional government in collaboration with the Group of Catalan Architects and Technicians for the Progress of Contemporary Architecture (GATCPAC), and the dispensary itself built by the Institute Against Forced Unemployment (ICAF), which offered jobs to unemployed workers.

The architects Josep Lluís Sert, Josep Torres Clavé and Joan Baptista Subirana presented the project as a an ‘L’-shaped building, designed to receive as much light and ventilation as possible from outside. It was formed by three blocks on four floors with a large, central courtyard. Large windows allowed natural light to enter and brought air in to freshen up the atmosphere.

It was designed to provide care, that is, for people affected by Tuberculosis who had not been hospitalised, since their treatment required a different climate to Barcelona’s and the sick, once diagnosed, were usually sent to sanatoria away from the city.

The Ministry of Health at the Catalan government had the premises renovated in 1982. It was converted into a primary healthcare centre in 1990. 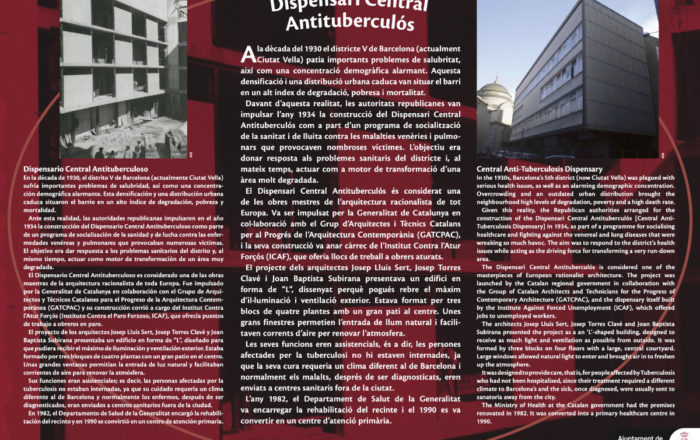