It was here, next to the former site of the Oriental Baths, , that the Escola del Mar was officially opened on 26 January 1922.

This was a municipal initiative founded by the educationalist Pere Vergés (1896-1970) and designed by the municipal architect Josep Goday (1882-1936). The original building was destroyed in an air raid by the Italian air force on 7 January 1938, but the school continued its work at the Roserar de Montjuïc (1938-1948) and the Escola del Mar del Guinardó (from 1948 to today).

The Escola del Mar was a model of educational renewal that offered a comprehensive education for city residents, by promoting student self-sufficiency and participation in the school's management, putting students in charge of some activities and services, such as the library, the weather service and , from 1933 onwards, the publication of its magazine Garbí. Organised like a republic, the school was governed by its students, with equal conditions for boys and girls. Its special location, next to Platja de Pescadors, proved ideal for children with health problems and conditioned its educational approach, which focused on sports activities and observation of the natural surroundings.

The fascist air raid on Barceloneta and Sant Martí destroyed the Escola del Mar's original building on 7 January 1938. Fire fighters had to put out a huge fire at the school, which had originally been built from wood. 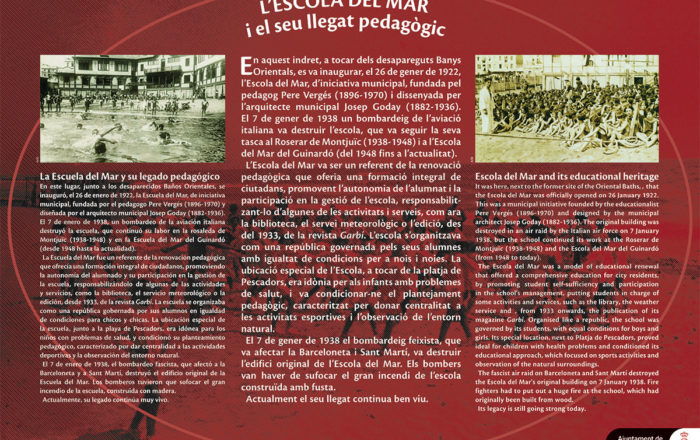