Flama: A monument to Republican values

On 12 April 1936 Barcelona's Republican City Council officially inaugurated a monument at the junction between Passeig de Gràcia and Avinguda Diagonal (at that time called Avinguda del 14 d’abril). It consisted of a 19-metre-high column crowned by a statue entitled Flama – by Josep Viladomat– commemorating the Spanish Republic, and with a medallion at its base – by Joan Pie - in homage to Francesc Pi i Margall, one of the presidents of the 1st Republic.

In 1939 the Francoist City Council changed the meaning of the monument: they renamed the site Plaza de la Victoria, transformed the column into a military obelisk, removed the Republican statue and medallion, and commissioned Frederic Marés with a statue to commemorate the military triumph.

In 1981, the square was renamed Juan Carlos I, the King of Spain at the time, erasing the monument's original Republican meaning. In 2017, Barcelona City Council recovered the square's popular name: "El Cinc d'Oros".

In 1990, the Republican sculpture Flama was returned to the city's public space when it was put up in the same Plaça de la República, then known as Plaça de Llucmajor, having remained in oblivion for years, first in a municipal warehouse only to be passed around various parts of the district later on, including Plaça de Sóller. The monument in that new installation was not accompanied by any plaque or sign identifying it as a monument to Pi i Margall and the Spanish Republic, as a result of which it remained in total anonymity, epitomising the tendency to cover up the city’s Republican references. Its ethical and political value disappeared.

The start of the new millennium saw journalists, historians and associations start calling for the monument to be given signs and a name, a goal that was finally achieved in 2012. It was thanks in part to the tenacity of neighbourhood residents that the monument has remained at this site.

In 2016, Barcelona City Council responded to the demands and changed the name of the square to Plaça de la República in homage to its values of equality, freedom and fraternity. Today's Plaça de la República is the nerve centre of Nou Barris, although it enjoys that status above all because it hosts the district’s most powerful visual image and striking symbol: the monument to the Republic. 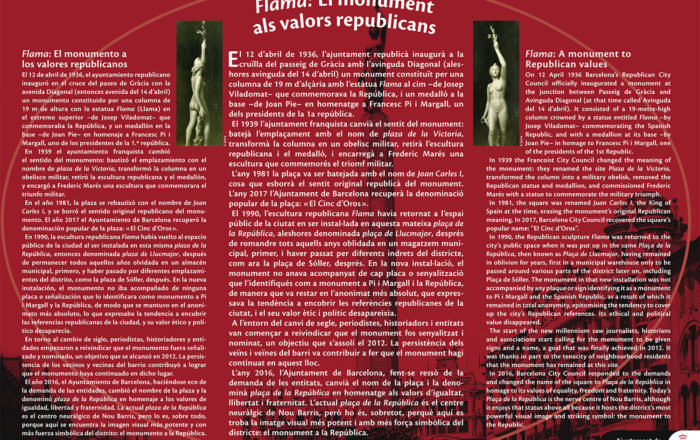