Francesc Boix, the photographer from Poble-Sec

Francesc Boix had become a symbol of young people committed to the defence of the Second Republic, an accolade that would lead him to exile in France, deportation to the Mauthausen concentration camp and rebuilding his life in Paris, up to his untimely death at the height of his youth. In 2017, his remains were interred in the French capital's Père Lachaise cemetery.

It was within the Second Republic's dynamics of excitement and hope that some of the basic features of his life took shape: his interest in photography, the cultivation of friendships, the commitment to the United Socialist Youth organisation and the involvement in front-line and rearguard battles.

After a stretch as an inmate in France's infamous concentration camps, he was deported to Mauthausen concentration camp, where his work for the Identification Service enabled him to become a key part of the collective initiative to steal photographic material which, together with his work as a reporter following his liberation, provided decisive proof of the Nazi's crimes.

He worked intensely in France as a press photographer, covering several countries and documenting the events and demonstrations among communist circles against Franco's dictatorship. His face and words played a leading role in the Nuremberg and Dachau trials against the Nazi mass murderers.

Barcelona City Council wanted to pay homage to Francesc Boix in 2020, to commemorate the centenary of his birth. 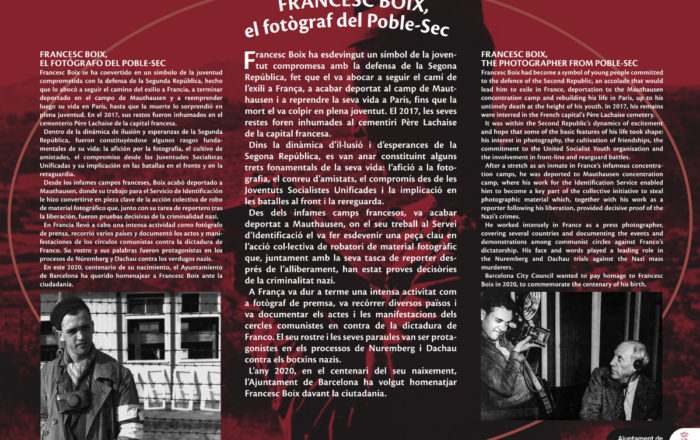