On this site, Francesc Layret i Foix (Barcelona, 1880-1920), the Catalanist republican politician and labour lawyer, a man committed to the fight against social injustice, was assassinated.

He was a firm believer in the value of education and was one of the founders of the Ateneu Enciclopèdic Popular, in 1903, where he gave classes to workers and students.

Shortly after joining the Republican Union Youth, at the age of 25 he was elected as a city councillor in the 1906 municipal elections. He promoted the Cultural Budget', in which he defended education which was non-religious, mixed and in Catalan.

He founded La Lucha, an anti-royalist and anti-military newspaper, and in 1917 supported setting up the Catalan Republican Party -a federalist party that aspired to be a workers' party. In 1919, he was elected as a member of the Spanish parliament, where he denounced the repression of the proletariat following the Canadenca strike. At the same time, he also acted as a lawyer defending agricultural workers and anarchist workers belonging to the CNT.

On 30 November 1920, he was attacked as he was leaving home to mediate for his colleagues Lluís Companys and Salvador Seguí, who had been detained in a state-led campaign against union members, republicans and nationalists. He was shot by gunmen from the Sindicat Lliure union, protected by the employers and governmental and military authorities. Thousands of people came out for his final farewell in a great show of outrage, which led to a general strike. 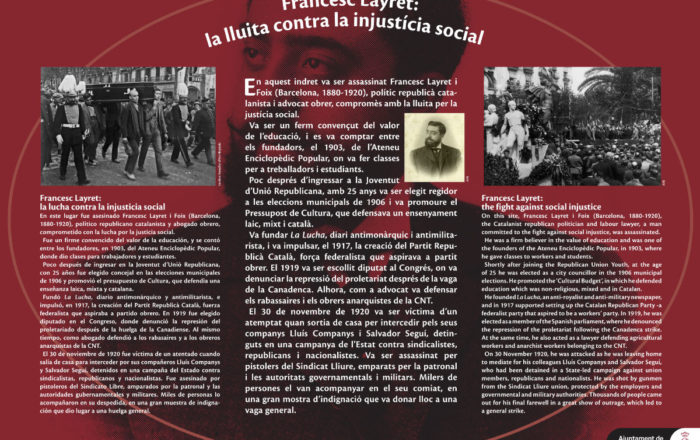