Gun law and the murders of Salvador Seguí and Francesc Comas

On 10 March 1923, the workers' leaders Salvador Seguí, known as the Noi del Sucre [Sugar Boy], and Francesc Comas, nicknamed El Paronas, were murdered by gunmen sent by the Catalan business association at the crossroads between Carrer Sant Rafael and Carrer de la Cadena, at this corner. These murders took place at a time of great social violence.

Between 1919 and 1922, Catalonia was in a state of emergency and its constitutional guarantees had been suspended, but the trade unions were fighting harder than ever and their struggle had become consolidated thanks to the new forms of action and organisation that had contributed to the victory of the Canadenca strike and the achievement of the 8-hour working day.

The Barcelona Business Association decided to stop trade unionism in its tracks through the use of guns, using gangs of hired gunmen to murder workers' leaders. Some workers’ groups also responded with violence, murdering employers and company executives. The violence on the streets of Barcelona during that time was uneven: 9 employers, 13 company executives, 2 police officers and 128 trade union leaders were murdered between 1921 and 1923. In 1923, a year marked by the murder of Salvador Seguí, the most important workers leader, the labour movement's top ranks were decimated to make way for General Primo de Rivera’s dictatorship a few months later. 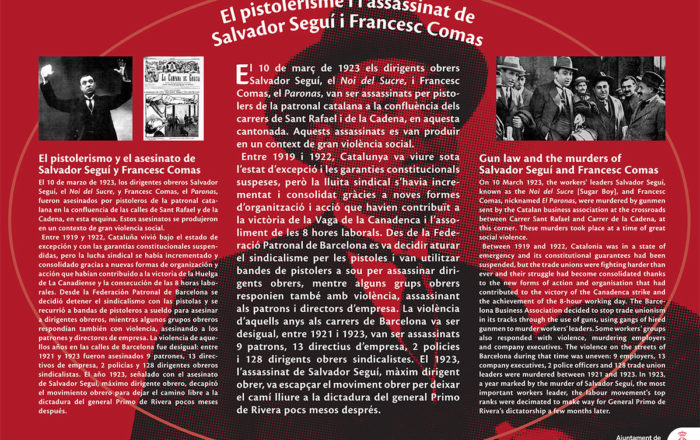