Before you stands the Casa Provincial de Maternidad y Expósitos de Barcelona (Provincial Home for Maternity and Foundlings of Barcelona). Until the late 19th century, public care for impoverished mothers was practically non-existent, and the only social resources available were based on charity from religious associations that also treated the mothers they assisted as sinners.

With industrialization, waves of women came to the city seeking work as domestic servants or factory workers. At the same time, the number of “illegitimate” births grew, and many single and/or impoverished mothers were forced to give their children to charitable institutions. The turnstile on the building’s façade was a place for mothers to discretely leave their infants. In addition to shame and injustice, these mothers were forced to face the pain of giving up their offspring. Many infants died before their first birthday, but those that survived were send to the neighbouring Casa de la Caritat (House of Charity) where boys were trained as salesclerks and girls were trained—ironically—as domestic servants.

In December 1936, the Government of Catalonia authorized abortions, making the Catalan health system one of the most advanced in Europe. The dispensary at the Casa de la Maternitat became an authorized facility where women could receive safe medical treatment. 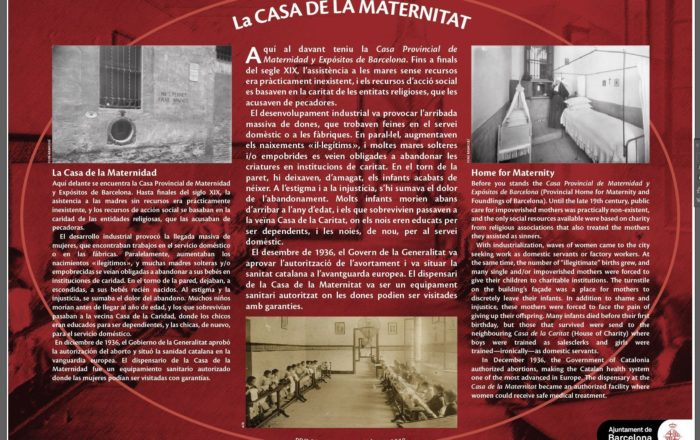