The aerial bombing of the square

Barcelona was continuously bombed on the morning of 30 January 1938, from 9 am to 11.20 am, by Franco's ally, the fascist Italian air force.

The Sant Felip Neri church, which was in the hands of Catalonia’s republican government, was being used as an air-raid shelter for children from the neighbourhood and other parts of the Spanish Republic, seeking refuge from the fascist terror. The bombs levelled the church, burying the children who had sought shelter in its basement. Some twenty died. The aerial bombings went on non-stop, the bombs hampering efforts to evacuate the site. Forty two people were massacred that morning and over a hundred wounded. The square was devastated. The only thing left standing was the church façade, which still bears the marks of the shrapnel today.

For years, Francoist propaganda offered an account of how the marks on the façade were caused by bullets from firing squads executing priests from the church, a version which covered up their part in the massacre.

The municipal authority rebuilt the square in the 1950s, using renaissance elements taken from other bombed sites, such as the old Catedral neighbourhood, now Plaça Nova, and the fountain, giving the square its present appearance and consolidating the building work that gave rise to the Gòtic neighbourhood.

In 2018, eighty years after the aerial bombing of Barcelona, the City Council introduced signs in the square to explain what happened. 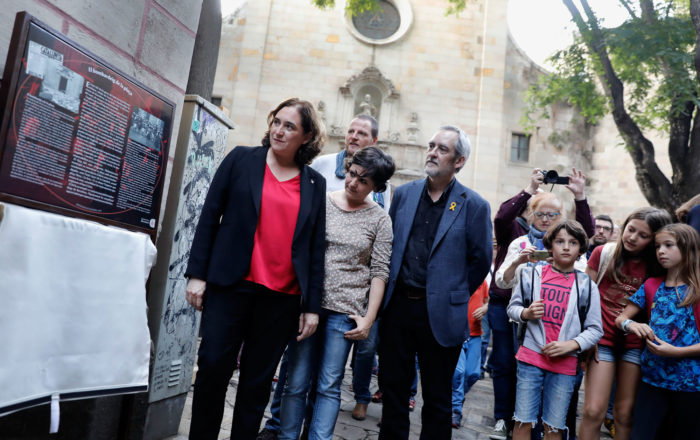