The women’s suffrage movement was a social movement organised to demand women's right to vote on the same terms as men, following the Seneca Falls Declaration of Sentiments in the USA, in 1848. The suffragette movement spread to Catalonia and the rest of the Spanish State in the early decades of the 20th century, when various feminist organisations fought for the right to vote. Through their actions they laid the foundations for a current of feminist, egalitarian and emancipatory thought which, besides the vote, demanded recognition of women’s legal, educational, cultural and labour rights.

With the arrival of the Second Republic in 1931, women achieved representation in the Spanish Parliament but without the power to vote. It was not until the general elections in 1933, and thanks to the persistence of the suffragettes, that women were called to the ballot box for the first time in the country’s history.

The Radical Party MP Clara Campoamor (Madrid,1888 - Lausanne, 1972) played a key role in this in the Congress of Deputies, where she championed women's democratic right to vote as an imperative necessity. A woman of republican and feminist ideals, Clara Campoamor also fought for the Divorce Act to be applied and helped to improve the rights of children.

She was forced into exile, first to France and later to Switzerland, where she practised as a lawyer, combining this work with the translation of Spanish classics and collaborating with various magazines. 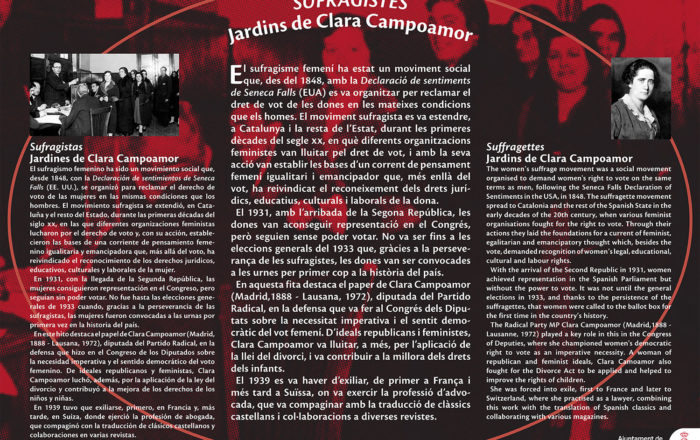