When the Second Spanish Republic was proclaimed in 1931, fascism was spreading throughout Europe.

A failed coup d’état in July 1936 that intended to put an end to the Republic signalled the start of the Spanish Civil War (1936-1939). Thousands of men and women from all over the world saw an opportunity to keep fascism at bay by defending the Spanish Republic against the rebel troops led by General Franco, who enjoyed active military support from the armed forces of Hitler and Mussolini. A situation that made Spain the first testing ground for the Second World War.

In September 1936 the International Brigades began to be organised. These were military units made up mainly of anti-fascist men and women volunteers from across the globe. Nearly 35,000 people from over 50 different nations enlisted in them over the course of the war and some 10,000 lost their lives in combat. Despite the large presence of intellectuals and professionals, including nurses, writers and doctors, most of the volunteers came from the working class.

Two years later, the League of Nations forced the Brigades to be withdrawn. On 28 October 1938, the Republican government organised a huge, emotive farewell ceremony in Barcelona with a parade of international soldiers.

Fifty years later, on 28 October 1988, a monument by the sculptor Roy Schifrin entitled “David and Goliath” was unveiled
as a tribute to the International Brigades, on the initiative of the North American Spanish Civil War Historical Society. The base bears an excerpt from the farewell speech that Dolores Ibarruri, “La Passionaria”, dedicated to the Brigades.

The Horta-Guinardó district, in collaboration with Amical de les Brigades Internacionals de Catalunya, pays tribute to them in an annual ceremony held in front of the monument every October. It is one of the activities designed to keep the democratic memory alive and is attended by former fighters and their family members, as well as several associations, the Catalan government and Barcelona City Council. 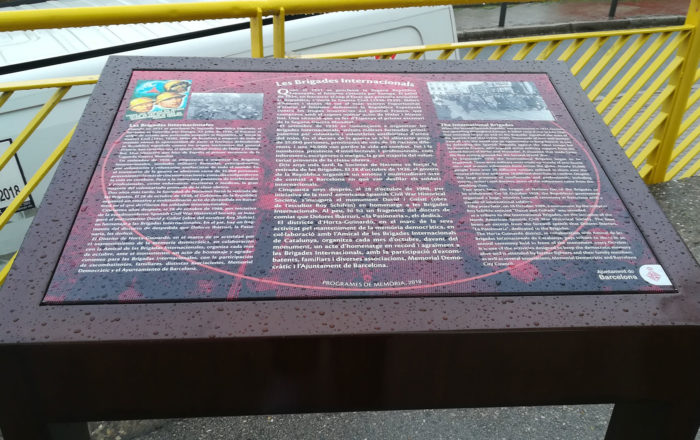