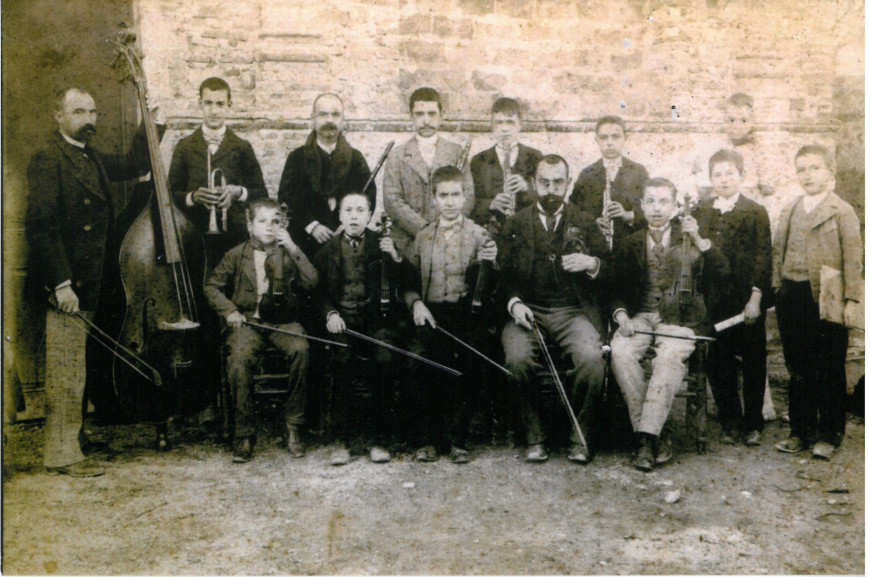 The Monné family from Olesa and Esparreguera have been an active lineage of musicians from prior to 1850 to nearly the present. The family line included performers, composers, arrangers, copyists, orchestra conductors, representatives, music teachers and choral directors. Several branches of the Monné extended family had preserved most of the family-generated musical documentation and ensured its conservation and public accessibility by giving them to the Olesa de Montserrat Municipal Archive and the Barcelona Music Museum. The collection is made up of thousands of documents: sheet music, photographs, invoices, posters, cards, programmes, payments to composers and teaching materials.

The first Monné family members to be documented as musicians are the Monné-Batallé siblings, born between 1839 and 1864. There is reason to think that not only did the Monné family itself have a musical background, but in addition its members, for several generations, were related with other families of musicians in the area, starting with the Cortadas and Pujols, and then with the Cañadell, Simon, Parera and Margarit families. There is even a possibility that these Monné musicians of the Baix Llobregat were related to the Munné piano makers in Barcelona in the mid-19th century.

The first two generations of the Monné family from Olesa appear in the registers as espadrille makers, but from the third onwards, the Monné-Batallé musicians are listed as café owners. There was usually a piano in the cafes, and the Monnés played it themselves in the premises they ran.

We know little about the Monné-Batallé girls, but at least two sons (Màrius and Agustí Simon Monné) of the eldest daughter (Rosa) would also be musicians. In the next generation, during the second decade of the twentieth century, we find that at least sisters Rosa and Josepa Monné Casanovas were performing publicly as pianists, and participation by female family members in professional music performance activities would continue until the Civil War. The most notable case is Francesca Monné Subirana (c.1906 -1990), one of the first orchestra vocalists and founder of the first female orchestra in Catalonia. She was also a saxophonist and pianist, as well as tenured conductor of the orchestra she formed while exiled in France

The Monné family mainly worked in and around their own villages of Esparreguera and Olesa. However, as it became easier to travel, they performed from the Camp to the Empordà counties and around northern Catalonia. They played on all kinds of occasions and, therefore, performed all kinds of repertoires, both their own and those of other composers: dance songs of the time, ranging from lanceros, rigadoons, polkas and waltzes to double-steps, jimmies, boogies or fox-trots; church music; Passion service music; special compositions for the Daughters of Mary and for certain inaugurations; arrangements of opera or zarzuela fragments for concerts. From certain moments onwards, compositions or orchestrations of sardanes, of caramelles, of “Catalan ballets” and of pieces from the Orfeó Català (works by Vives, Millet, Nicolau, Toldrà, etc.) also appear.

There are also music teaching resources in the conserved collection, which is another of the family’s long-running activities. That part of the collection includes books published by other authors and manuscripts by the Monnés themselves, which deal with music theory, harmony, counterpoint, and exercises for piano, trombone, double bass, etc. There are also materials by Narcisa Freixas and Joan Llongueras.

Other musical activities long practiced by the Monné family were representation, arrangement and orchestration, copying sheet music and conducting of all kinds of choirs.

Their religious pieces are more enduring than any other repertoire, so it is not uncommon for them to be present in the series of scores, especially if they were personally composed (trisagions, masses, hymns to Mary, misereres, rosaries, orchestrations of goigs). But outside the repertoire required by the conquerors in the Spanish Civil War, there is no indication of an ideological bias: papers from the March of the Daughters of Mary from the same time period and handwriting are preserved as the La Marseille, a sign that they really played for all types of audiences.

The musicians were multi-instrumentalists. They all played at least one stringed instrument (and many times also a wind instrument) and were trained as pianists; in fact, Feliu Monné Batallé, Àngel Monné, and Quico, Rosa and Pepita Monné Casanovas had regularly played the organ or harmonium in the church, before and after the Spanish Civil War. The family tradition was that the basic training of a musician consisted of knowing how to play a melodic instrument (usually the violin) and the piano, the latter in order to understand harmony. Apparently, most of the descendants of the Monné-Batallé line had musical education, even those who never devoted their lives to music; they were and are able to read a score and play some instrument. For example, Antonia Galceran Monné said that just as she did not remember learning to walk, she did not know how or when she learned music, “I always knew the notes”, she would say.

The orchestras consisted of about ten or twelve musicians but could be expanded or reduced depending on each occasion’s needs or budget. They appear as string, string and wind formations, wind and percussion formations, and so on. The single series of photographs in the collection shows both the evolution of musical formations (especially dance) and the adaptation of musicians to new ones; for example, the adoption of cobla instrumentation in the Empordà style (1908) or for jazz bands (1934).

A part of the repertoire, which was more significant as we go back in time, is personal compositions. They included many dance and religious pieces, many pieces for specific occasions, and so on. Another important part was adaptations or arrangements of pieces by other authors. Within this we must highlight the music from previous stages used in the performances of the Pastorets and the Passion, or in other sacred dramas and religious acts of Holy Week. Whole instrumentations by another person, some manuscripts and some printed, which progressively increase as from the emergence of the gramophone and the radio can also be found in the collection. Due to its uniqueness, the series of compositions studied and published by Xavier Bayer in 2000 for the gralla llarga (long shawm) and percussion deserve to be mentioned.

The scores kept by the family confirm that the main composer in the family was Feliu Monné Batallé (1864-1935). Nevertheless, nearly every other musician in the family has at least some composition and, of course, many arrangements.

The passion composers in the Monné documents

The book, El llegat dels músics Monné d’Olesa i d’Esparreguera. Amb notícia de les músiques de Passió que conté was published in Esparreguera this January. It gathers details from this collection and its creators, based on more than 600 documentary references from the collection itself.