43, Via Laietana. A remembrance of repression

In 1929, the Provincial Police Headquarters opened at nº 43 Via Laietana. After its creation, the Government of Catalonia used the building to house the General Office of Public Order. However, in 1941 the Franco dictatorship converted the space into the headquarters for the Superior Police; from then on, it served as the seat of the Political-Social Brigade, whose job was to stifle political dissidence.

After its inauguration near the end of the Primo de Rivera dictatorship, this site became the epicentre of repression against trade unions and the workers’ movement . During the Republic, the building continued to be a place of repression, known in workers’ circles as “The bloody mill”.

From 1941 to the return of democracy, this building was the centre of Francoist repression in Barcelona. Scores of anti-Francoists were held in its unsanitary, crowded cells, suffering from all kinds of torture in the interrogations. With this historical marker installed in 2019, the Barcelona City Council acknowledges the space most closely associated with political repression in the city. In so doing, we seek to remind current and future generations of the high cost of the conquest of democracy and equality. 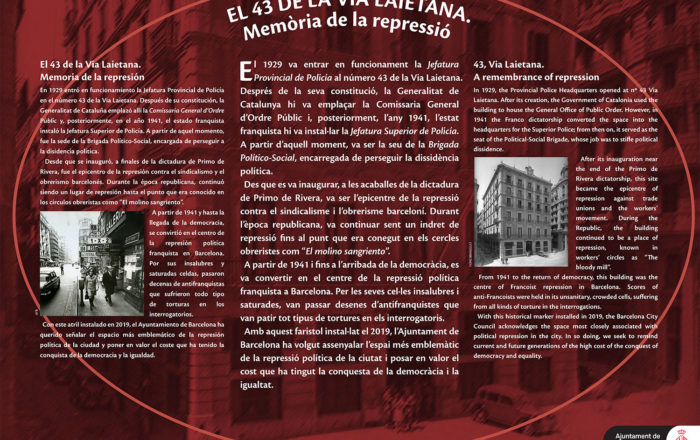