Barcelona put in several bids in the 1920s as host city for the Olympic Games. Which is why holding the International Exposition of 1929 was seen as a great opportunity for the city to demonstrate its sports traditions and organisational capabilities. The Exposition’s first ceremony was the official opening of the new Montjuïc Stadium, one of the most modern in Europe.

Barcelona was well placed to play host to the 1936 Olympics; the decision was to be made in that very city, where the International Olympic Committee (IOC) had planned to meet in April 1931. However, the proclamation of the Second Republic a few days before and the abdication of King Alfonso XIII put off several members of the IOC with aristocratic links from attending the meeting. In the end, it was Berlin that was chosen to play host to the Olympic Games in 1936, which were turned into a propaganda show-piece for the Nazi regime.

During that time, Barcelona decided to organise its own popular games, to promote connections between nations through sport, with a clear anti-fascist and anti-classist message. On 19 July 1936, the Montjuïc Stadium was all set for its official opening; however, the military rebellion against the Republic, which triggered the Spanish Civil War, stopped the ceremony from taking place. Many foreign athletes enlisted for the militias and thereby became the first foreign fighters to defend the Republic, before the creation of the International Brigades.

During the Civil War, the Montjuïc Stadium was used by the Central Refugee Aid Committee as a shelter for refugees from Francoist repression. The stadium fell into disuse during the dictatorship and was nearly demolished in the 1970s. After Barcelona had been chosen as the Olympic Games host city in 1992, the stadium was completely renovated, keeping the original façades from 1929. It was renamed the Estadi Olímpic Lluís Companys, in 2001, after the President of the Catalan government executed under the Francoist regime by firing squad in the grounds of Montjuïc Castle. 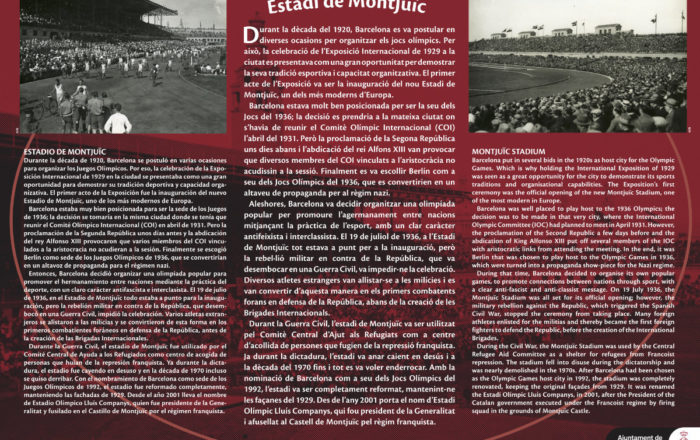