The Palm Tree and the Wall

Surrounded by the Riera of Horta and Isidret’s sèquia, the area where the neighbourhood of la Palmera (the Palm Tree) is located was the home to textile and chemical factories, industrial organic waste landfills, as well as to the houses a cooperative called Mutua de Previsión y Hogar built around the 30’s. Consequently, the historical farmlands were gradually replaced by factories such as Española de Blanco de Zinc, Tintes y Aprestos de Viuda de Domingo Mas, or the large storage and outlet warehouse of organic waste coming from cesspits, used to fertilize the fields, built in 1881. Some time later, that textile factory holding the chimney was replaced by Bidones Ballester, which continued operating until the square was rebuilt.

The third phase of Sant Martí industrial state was scheduled to have 4 blocks of flats in the premises of the square. It concerned 400 flats refused by the neighbours. The confrontation between the neighbours and the property representatives was so serious that the Council had to agree the purchase of the area with the construction companies. This led to the inauguration of the square in 1984.

What we see today helps us remember its industrial past, forget its agricultural origin, and makes us look up to its future. The iconic and controversial sculpture made by the North-American Richard Serra, which stands as a symbol of welcome together with the palm tree, characterizes and synthetizes La Verneda’s friendly character.

It is made of two curved walls which enhance its unbalanced dynamics. Furthermore, it creates two different atmospheres: on the one hand, an area with a gazebo, benches and trees providing shade and darkness; on the other, a warm and sandy esplanade having the palm tree as key feature. This sculpture emphasizes the undetermined landscape up to the extent of thinking that, according to Serra, “the dialectic between strolling around the landscape and watching it is the basis of the experience of this sculpture”. 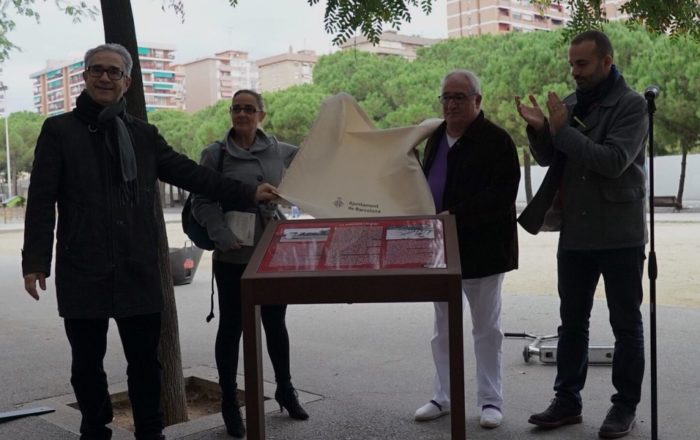