The point where Avinguda Diagonal meets Passeig de Gràcia has been known popularly as the “Cinc d’Oros” since the square was laid at the start of the 20th century. The image created by the central roundabout and some traffic islands on the side lanes reminded people of this card from a Spanish deck of cards. The nickname stuck with the installation of six Modernista lamp posts designed by Pere Falqués in 1909, which were removed in 1957 and relocated in Avinguda de Gaudí. By 1902, Barcelona City Council had already decided to dedicate a monument to Francesc Pi i Margall, the prime minister of the First Spanish Republic and promoter of federal republicanism, and in 1907 passed a motion to locate it at this crossroads. A design by the sculptor Miquel Blay was chosen, following a public competition held in 1909, but in the end it never materialised because of political differences and the arrival of the Primo de Rivera dictatorship. When the Second Republic was proclaimed in 1931, the new City Council provisionally installed a bust of Pi i Margall, made by Felip Coscolla, pending a new proposal for the monument (photo 1). Eventually the current obelisk was erected in 1934. Designed by the architects Adolf Florensa and Josep Vilaseca, it was crowned with Josep Viladomat’s sculpture Flame, representing a female nude wearing a Phrygian cap (symbol of the Republic) and holding a laurel branch. A medallion depicting Pi i Margall was placed at the foot of the monument. However, the political convulsions unleashed by the events of October 1934, when the President of the Generalitat, Lluís Companys proclaimed the Catalan State within a Federal Spanish Republic, forced the monument’s inauguration to be delayed. So it was not until 12 April 1936 that the monument was officially unveiled in the presence of Companys and the Mayor of Barcelona, Carles Pi i Sunyer, accompanied by other dignitaries and a large crowd that gathered in the square (photo 2). A few months later, during the military uprising in July 1936, which led to the outbreak of the Spanish Civil War, the Cinc d’Oros was the scene of the first clashes between rebel soldiers, from the Pedralbes and Sant Andreu barracks, and Assault Guards supported by militant workers defending the legally elected Republican government. The soldiers were driven back and abandoned their weapons when they fled. On 28 October 1938, when the war was at an advanced stage, the square also witnessed the send-off given to the International Brigades, Barcelona’s thanks to the brigaders,who had come from all around the world to defend the Republic and fight fascism,for their commitment.

After the war was over, the new Francoist City Council renamed the square “Victory Square” and removed the Republic sculpture and the medallion dedicated to Pi i Margall. The sculpture that had come second in the original sculpture competition, designed by Frederic Màres and representing a woman with an upraised arm, was installed in their place at the foot of the obelisk. Thus “La República” became “La Victòria”. A Francoist coat of arms was added too, along with an inscription in honour of the military uprising. An imperial eagle completed the obelisk, which led to it being called the “Plaça del lloro”, or Parrot Square, among locals (photo 3). Following the Allied victory in WW2, the Francoist regime removed some of the fascist symbols from the public space. The eagle was removed from the Cinc d’Oros leaving the obelisk bare for the first time, so the square then became known as the “Plaça del Llapis” or Pencil Square. Under the dictatorship, the monument did not escape the actions of anti-Franco movements, which attacked it several times, notably in April 1946, when an explosive device knocked down the Victory statue. Later, during the transition to democracy, the square was also the scene of various demonstrations, such as those calling for freedom, an amnesty for political prisoners and a Statute of Autonomy for Catalonia on 1 and 8 February 1976 (photo 4). After democracy was restored, right-wing groups congregated in the square to support the fascist nature of the monument, while on 14 December 1979, the inscription that paid tribute to the rebel army and the Francoist coat of arms were torn off by other groups. These were subsequently replaced by the coat of arms of the Royal Household. Then, on 27 February 1981, the square was officially named after the then king of Spain, Joan Carles I. The original Republic sculpture Flame, which had been hidden in some municipal stores, returned to the public space in 1990, but in a new location: in Plaça de Llucmajor (now renamed Plaça de la República) in the Nou Barris district, where you can see it today. As for Frederic Marès’s Victory statue, that was removed from the obelisk in 2011, in compliance with the so-called “Historical Memory Act”. Finally, in 2017, Barcelona City Council approved a change in the square’s name to Plaça de Cinc d’Oros, thus restoring its popular name. 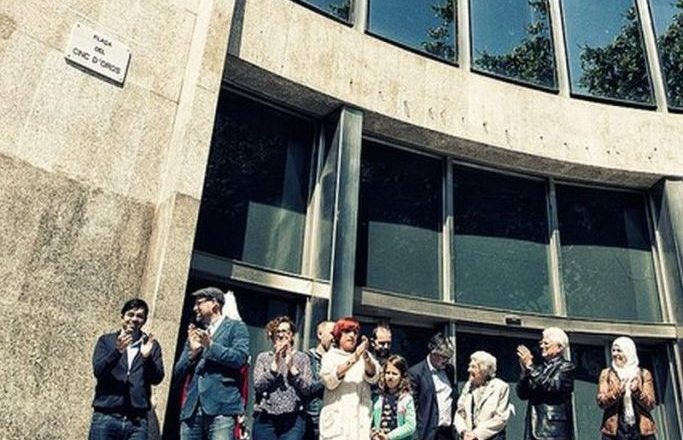