This square is the former site of the Convent de Sant Sever i Sant Pere Borromeu, which burnt down during the bullanga or revolt of 1835. It began operating as a municipal correctional prison in 1838 and a national prison for men and women. It was known as the Reina Amalia Prison or Old Prison It only had 287 cells but it was always overcrowded and had deplorable conditions of hygiene. It was surrounded by the courtyards of La Gardunya, Micos and Cordelers, where public executions were held. Aniceto Peinador was executed there in 1893, an event that Ramon Casas based his painting “El Garrot Vil” on. The painting has become a symbol of the brutal nature of the death penalty.

When the Model prison for men officially opened, the Reina Amàlia prison became Barcelona's first gaol for women, depriving numerous many working-class women of their liberty who, forced to survive in a city full of inequality, had been accused of robbery, swindling, prostitution and political crimes, above all trade-union activism.

The prison was officially closed on 19 July 1936 and its prisoners were freed. The pro-freedom group known as 'Mujeres Libres' called for its demolition, which officially began following a resolution passed by Barcelona City Council on 21 August, after the establishment of the Bon Consell women’s prison in Les Corts by the Generalitat. 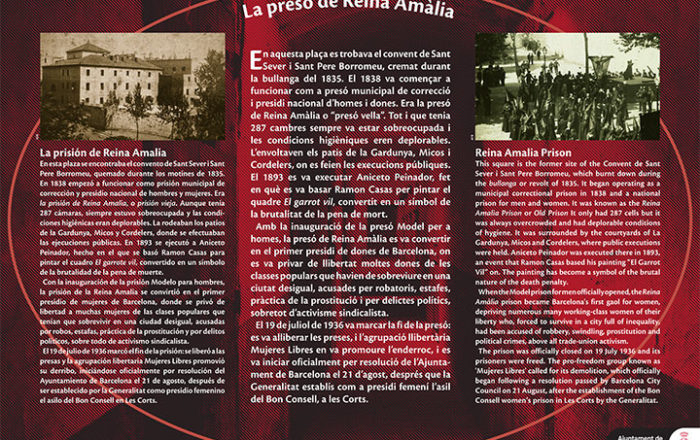