Transparency cannot be sacrificed to the benefit of trade secrecy

We, the Mayors and elected local representatives, participating in the first Pan-European Meeting of Local Authorities and the New Generation of Free Trade Agreements, declare that:

The European Commission, on the mandate of the Member States, has entered into negotiation with the United States of America on the Transatlantic Trade and Investment Partnership agreement (TTIP), as well as the Comprehensive Economic Trade Agreement between Canada and Europe (CETA), and the Trade in Services Agreement (TISA). These treaties are being negotiated in a non-transparent manner, not fulfilling European democratic and participatory standards.

We believe that transparency cannot be sacrificed to the benefit of trade secrecy. Local and regional bodies must play an integral part in the negotiation of the mandates.

Today, Europe finds itself at a crossroads. The crises being experienced by the EU require a political solution. As such, we believe that Europe needs to place core values at the centre of its policy: solidarity, respect of freedoms and justice. These new generation trade agreements are doubtfully beneficial to society as a whole. Europe must underpin its economy by strengthening social, economic, environmental and employment rights and not merely by widening free trade.

We are deeply concerned that these treaties will put at risk our capacity to legislate and use public funds (including public procurement), severely damaging our task to aid people in basic issues such as: housing, health, environment, social services, education, local economic development or food safety.

We are also alarmed about the fact that these pacts will jeopardise democratic principles by substantially reducing political scope and constraining public choices. The implementation of a range of measures will gravely impact on local democracy, such as the Investor-State Dispute Settlement (ISDS) or International Court System (ICS), Regulatory Cooperation in TTIP, and changes made to the regulation of government procurement and public services.

We recognise the importance of the trade of goods and services for citizen wellbeing, but we stress that competitiveness and economic growth should not be the only criteria used to determine free trade agreements such as TTIP, CETA and others (such as TISA).

We believe that international trade must be based on criteria that is not limited to mere free trade. We must defend trade which is fair, sustainable, and which upholds labour rights.

We consider it our duty, as elected representatives, to defend local communities and democratic institutions as spaces for debate and decision-making, and to strengthen public policies for the good of our citizens, protecting the environment and supporting SMEs and the local economy.

We demand that current negotiations on TTIP and TiSA be suspended until the concerns of local and regional governments have fully taken into account in the ratification in any of these treaties.

We celebrate the social movement which has made this European debate possible and we want to give them due recognition for their role and we invite them to continue their work.

For all these considerations, we demand that current negotiations on TTIP and TISA be suspended and a new mandate renegotiated taking into account the demands of those who have not been consulted and we urge the European Parliament, European Council and national governments not to ratify CETA.

This Declaration will be adopted by all cities present and to be signed by all those who shall adhere to it in the future, will be presented to those responsible in the European Union, national governments, and pertinent institutions and organisations. 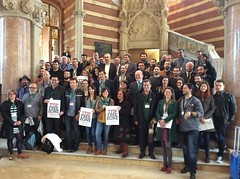