Casa de l’Ardiaca, once the archdeacon’s house, was built around the 12th century, taking advantage of part of Barcelona’s old Roman wall. At the end of the 15th century, Archdeacon Lluís Desplà had it rebuilt in the Gothic style, with some Renaissance features.

Disentailed in the 19th century, it passed into the hands of some new middle-class owners who completed the courtyard in the form of a cloister, based on plans drawn up by the architect Josep Garriga. They also carried out some interior alterations in line with the tastes of the time.

In 1895, it became the headquarters of the Barcelona Lawyers’ Association and the famous Modernista bust by Lluís Domènech i Montaner dates from that period.

Barcelona City Council acquired the building in 1919 to install the Historic Archives there, once alterations directed by the architect Josep Goday had been carried out.

As a result of the air raids carried out in the Civil War (1936-39), the houses adjoining the wall exterior were demolished and Avinguda de la Catedral was opened up. Between 1955 and 1962, the Casa de l’Ardiaca façades were remodelled under the direction of another architect, Adolf Florensa.

Three decades later, between 1991 and 1998, the building was completely renovated to strengthen it and improve the working, consultation and document conservation conditions, this time based on plans drawn up by the architects Roser Amadó and Lluís Domènech. 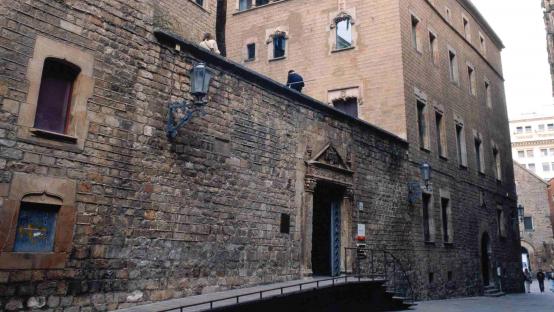