Home » Budget » What is the municipal Budget? » How is it prepared and approved?

As part of a progressive and effective implementation of the Executive Budget system, creating a budgeting process that strengthens the link between budget allocation decisions and priorities and desired outcomes (strategy) becomes a key factor. According to this, in the last years there have been a reform process of the municipal budgeting cycle, being the Budget 2015 that one in which most of these items have become as fully operational on its elaboration.

This renewed budgeting process considers some of the technical recommendations made by international organizations (IMF, World Bank, OECD...) in terms of public budgeting processes, especially regarding the implementation of Priority and Performance based Budgeting systems. However, elements obtained from the analysis of best practices of Governments of other countries have been useful to inspire the design of a renewed process for the Barcelona City Council, but always taking into account their particularities, context and specific procedures and rules, and taking advantage from the solid already existing budgeting system.

Below, the main stages or phases of the budget elaboration process of the Barcelona City Council are described:

After considering the results of the revenue baseline projection, the revenue forecast for the next year (considering the impact of proposed revenue regulations changes) is performed. With the information provided by the revenue forecast, the expenditure baseline projection, the projected outturn of the current budget and the targets from the budget responsibility regulations and the own financial targets, a preliminary medium-term financial framework is made, including a preliminary general expenditure limits (or ceilings). This general expenditure limit, in turn, is broken down into a general limit for current expenditures and a general limit for capital expenditures (investments).

Then the strategic priorities and the key results or outcomes to be achieved in the next budget are set by the City Government, considering also the information provided in participatory processes (currently in a progressive implementation). This information is used to break down the limit for current expenditures into sector/policy current expenditure limits (for goods and services and current transfer expenditures) to the City Council’s sectors and districts. Regarding capital expenditures, once its general limit is established, the various projects included in the Municipal Investment Program (PIM) (the medium-term capital expenditures program) are analyzed and assessed in order to make a proposal for the allocation of resources.

The next stage of the budget elaboration process consists in the budget requests formulated by sectors and districts, providing at the same time the corresponding program performance plans. Budget requests are articulated by the so-called decision packages, which are concrete proposed expenditure variations regarding the expenditure baseline projection. Each decision package means a concrete decision regarding policy/service changes. There are two main types of packages: the "new initiative", which includes proposals for new projects/services or for increasing the volume of existing services, and the "Baseline reduction”, which are requests based on the generation of efficiency savings or the reduction of services. Each decision package provides information about their need, description of its main elements, the justification in terms of contribution to the Strategic Framework goals and also related performance measures and the detailed items regarding its financial impact.

Decision packages and recommendations about allocations to capital projects, once are provided are analyzed and in order to take the finals decisions to align the allocation of budget resources to the defined priorities and key results. At this stage, final adjustments could be required regarding revenue forecasts and the medium-term financial framework (for example, due to obtaining more updated information) as well as regarding expenditures.

Once taken the final budget decisions, ​​all the documentation that must accompany the draft budget is elaborated and finally the Draft Budget is presented. 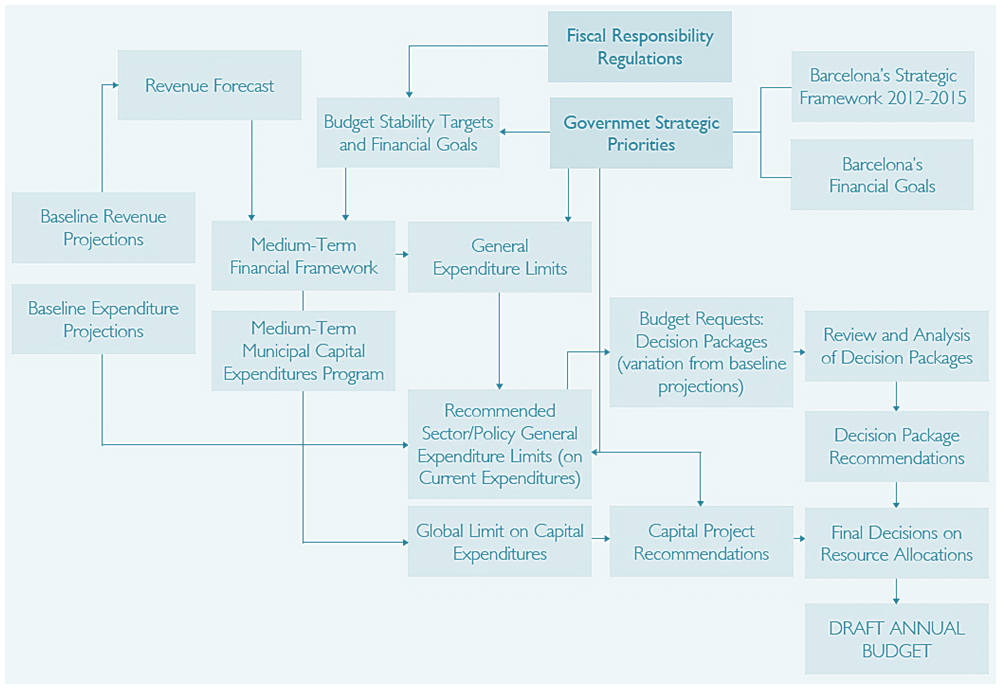