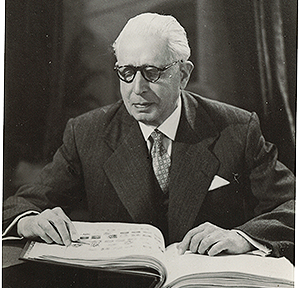 A keen philatelist from an early age, during the course of his life he acquired a comprehensive collection of stamps from all over the world, dating from 1840 to 1940. On 10th February 1956, Ramon Marull donated his collection to Barcelona City Council.

Ramon Marull i Huguet always linked the beginning of his interest in philatelic collecting with the visits he made during his youth to his family enterprise in different interviews. The factory’s business correspondence, with envelopes and stamps of so many different origins, attracted his attention immediately, and his curiosity drove him to introduce himself in the philatelic world.

Over time, he managed to join together an universal collection of stamps from 1840 to 1940, almost completely, with a total of 65.380 copies.

Ramon Marull i Huguet closed the collection when the enormous amount of editions of modern stamps made impossible to continue with the philatelic collecting. In order to be fully understood, this type of collecting was only affordable for the richest people because of its extension and dispersion. It was then, according to what he explained, that the thematic collecting began, more suitable for each one’s interests and possibilities because it was selective. The most extended themes were sports, zoology, arts, history, etc. Ramon Marull preferred then to close his collection.

On 10 February 1956, Ramon Marull donated his collection to Ajuntament de Barcelona disinterestedly for perpetuity, rejecting tempting and advantageous purchase offers. He wanted the collection to remain in his home town.

In 1962 his contribution towards the city and stamps collecting was amplified by the creation of Marull’s Philatelic Foundation, which would give an award each year in order to compensate financially the most distinguished person of that year at the work in favour of philately.

But Ramon Marull’s generosity was not only limited by this donation to Ajuntament de Barcelona, he also made financial contributions to Santa Creu i Sant Pau Hospital, along with his brother. The donation was intended for creating the biochemistry, haematology and pathological anatomy laboratories.

The two brothers, as members of Liceu Board, also introduced an award in the Superior Conservatory of Music intended to help the most outstanding pupils to continue their artistic career.

Among other minor philanthropic acts, not so known but equally enlightening in order to show these two brothers benefactor nature, there is the donation of two bells to Marcus Chapel in Barcelona (Mare de Déu de la Guia Chapel) in march 1957, due to the restoration undertaken by the city council. This chapel was built between 1166-1188 thanks to the legacy of a trader from Barcelona, Bernat Marcús. Located in one of the main routes of access to the city, was a departure and stopping place for horses and mounts. Since the 14th century the post formed a brotherhood, Confraria dels correus a peu i a cavall, which exercised jurisdiction over the Catalan territory during the whole next century.