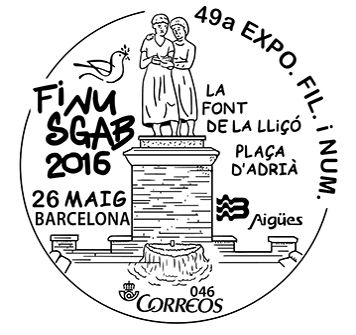 On 26th May 2016, the Spanish postal service Correos will offer a commemorative postmark devoted to the Fuente de la Lección (Fountain of Reading), which stands in the Barcelona square of Plaça Adriano. La Lección was one of the winning statues in the 1959 competition held by the city’s Parks and Gardens Department with the aim of making urban spaces more attractive. It was made by the Valencia-born sculptor Manuel Silvestre de Edeta (1909-2014).

Every year since 1980, the Philately and Numismatist Group at the water company Aguas de Barcelona (FINUSGAB) has produced a commemorative postmark. Each year the new postmark features a different fountain in the Catalan capital (and there is no shortage of them!), all of which are very interesting and steeped in history. One unusual example is the postmark from the year 2000, devoted to the Chato fountain in Plaça de Sants. The statue originally came from a monument that was demolished in 1877, after which it was moved from place to place until it finally reached Sants, where it can be seen today. During its travels, the allegorical figure of Old Llobregat appears to have lost his nose, which has led to the statue becoming popularly known as Chato (Snub-nose).

However, to return to our original topic, no doubt many of you are thinking: ‘But what is a commemorative postmark?’ For all those of you who are not specialists in this area, allow me to explain. There are two main types of postmark: the normal, everyday one, which is a mark that is franked over a postage stamp on a letter or a postcard, thus making it impossible to reuse the stamp. However, the second type (and which is less known to the general public) is the commemorative postmark. These can be applied for, by means of a private or an institutional request to Correos, for the purpose of celebrating a particular date or commemorating an event. But don’t raise your hopes unduly, as Correos may or may not accept your proposal. If it is approved, the stamping will be offered on a temporary basis, and will be carried out manually at a post office.

If you are considering starting a postal history collection, then postmarks are an excellent starting point. They are also an enjoyable way of finding out about the city’s public art, with further information on the subject contained in the municipal catalogue. And while you are considering this suggestion, we will leave you with a few examples from the Barcelona Fountains collection of Juan Francisco Molina, whom we would like to thank for his contributions.

We would also like to take this opportunity to thank all the members of FINUSGAB and Joaquín Galiarda for their contributions to the city’s postal history.