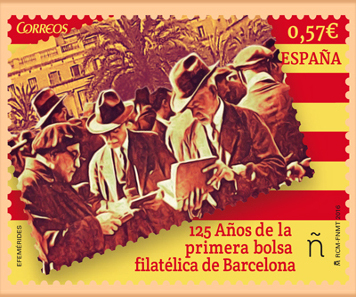 In the 1960s and ‘70s, big Catalan companies such as the automobile manufacturer SEAT and ENASA (which built trucks and buses) often had philately societies where their workers could enjoy their hobby during their leisure time.

In the 1960s and ‘70s, large Catalan companies such as the automobile manufacturer SEAT and ENASA (which built trucks and buses) often had philately societies where the workers could enjoy their hobby during their leisure time. Thanks to the advent of these research and exchange groups, stamp collecting became an important part of people’s free time, and often among their families as well. Unfortunately, most of these groups have now disappeared, with the exception of the one at Aigües de Barcelona (AGBAR).

As you may know, AGBAR is the company responsible for supplying drinking water to the city of Barcelona and its metropolitan area. In 1968, the company founded FINUSGAB, a section devoted to promoting activities related to numismatics and philately. Ever since then, this group organises annual exhibitions and meetings on the subjects.

Last April, on the occasion of the 125th anniversary of the first Barcelona Philately Exchange, FINUSGAB presented a stamp to commemorate the event. This important landmark in postal history highlights the links between the city and philately, given that Barcelona was one of the first cities to have its own public exchange or market for stamps, and which subsequently became an important meeting place for all stamp enthusiasts.

The origins of the exchange date back to the late 19th century, when stamp collecting first became popular, and philately enthusiasts began congregating around the shops that sold postage stamps with the aim of swapping stamps with each other. At first, selling stamps was not the main activity of these shops; it was rather because the owners of the shops were also enthusiasts. One of these was Josep Graells Blanch, a bookseller who was the first businessman to sell stamps, in his second-hand bookshop. The main meeting point was the street of Ronda Sant Antoni. So many people would meet up there that they began to cause problems, given the noise the made and the fact that they were obstructing the traffic. And so, in the 1920s, these activities were moved to the central square of Plaça Reial. It was then that the meetings became known as the Bolsa Filatélica (Philately Exchange), which was the precedent of today’s collectors’ market.