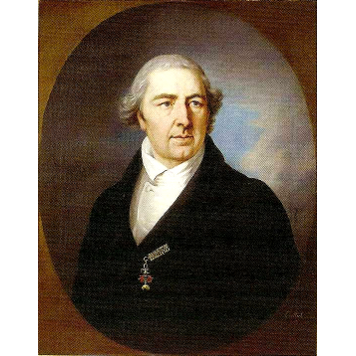 This family organised and operated a postal system in Europe from the early 15th century up until the late 19th century.

In the 15th century, Roger de Tassis founded a postal service in Italy, which became very successful. Shortly afterwards, in view of this success, his heirs were appointed Imperial Postmasters for the Holy Roman Empire. The Della Torre e Tasso family subsequently germanised their surname, changing it to Thurn und Taxis.

The family maintained this exclusive position for several centuries, despite the many political and social changes of the time; they remained in charge of the postal services of much of Central Europe despite the upheavals of the Thirty Years’ War and subsequent conflicts. In November 1516, the Thurn und Taxis family set up a postal service in Brussels that used couriers to cover an area as far as Rome, Naples, Spain (Charles V granted the company the title of “Chief Postmasters of Castile and the Kingdom”), Germany and France.

By the end of the 18th century, Thurn und Taxis employed around 20,000 people throughout Europe, including regional representatives, administrative staff and delivery workers. At that time, a letter sent by express mail from Paris to Brussels took only 36 hours to arrive, while standard mail from Brussels to Naples would take 14 days.

The Thurn und Taxis company held this monopoly until the 18th century, when their offices in lands now ruled by the kingdom of Spain were purchased by the Spanish government. From that point on, Thurn und Taxis no longer operated as a private company in territories ruled by the House of Bourbon. Later on, in the 19th century, after the Napoleonic wars, the Thurn und Taxis postal service became concentrated in Germany, where it provided a private mail service to several small German states and principalities, including Baden, Hessen, Württemberg, Bavaria, Lower Saxony and the Rhineland.

Following the creation of the first postage stamp in 1840, and the issuing of the first stamps produced in Germany (Bavaria, 1849), the Thurn und Taxis family also adopted this innovation, and in 1852 they began issuing their own postage stamps, which were mainly used by the company. Prussia’s victory over Austria in the Seven Weeks’ War led to Prussian troops occupying the whole of the Rhineland, including Frankfurt, where the commercial headquarters of the Thurn und Taxis company was located. In light of this new situation and the imminent political unification of Germany, the family decided to sell their entire private postal company to the government of Prussia, and finally stopped operating in 1867.

The historical legacy of this family’s commercial activities has lasted to the present day in several different ways. Firstly, there is the fact that the family’s coat of arms includes the colours black and yellow – colours now commonly used as the corporate colour scheme for many postal services around the world for their vehicles, logos, etc. And furthermore, both the word “taxi” (which became used to describe automobiles for hire), and the yellow or yellow-and-black livery generally used for these vehicles also have their origin in the company Thurn und Taxis.

Another indelible mark that this venerable company has left in history is the fact that the Thurn und Taxis postmen, who transported the mail from place to place on horseback, used to sound a horn to announce their arrival in a town or city. With the passing of time, this instrument has become the symbol of the postal service, and is used on many logos for different postal services.

The Gabinet Postal has in its collection a number of local stamps issued by the private company Thurn und Taxis that were distributed through the German states where the company held jurisdiction. Thanks to the ancient privileges the company possessed, between 1852 and 1867 (the period in which the German Confederation existed), the private postal corporation enjoyed a monopoly over the postal service in much of the western states of Germany, divided into two districts (North and South).