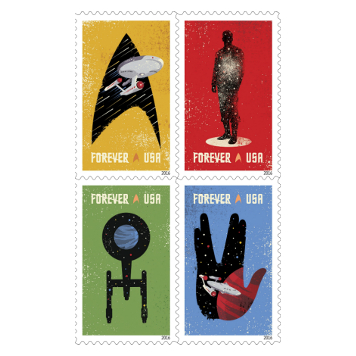 A Vulcan salute for the Star Trek stamps

Congratulations to all Star Trek fans that are also keen on philately! This month, the US Postal Service (USPS) is issuing a stamp series devoted to Star Trek.

Congratulations to all Star Trek fans that are also keen on philately! This month, the US Postal Service (USPS) is issuing a stamp series devoted to Star Trek. For only 47 cents, you can purchase any of the four designs available, while the full sheet of 20 stamps is on sale for $9.40.

The images that have been selected to represent the Star Trek saga are ones that we might expect, and mainly focus on the spacecraft, one of the most iconic features of the famous TV series. Thus, the stamps show the starship on a background featuring the Starfleet insignia, the silhouette of a crew member on a red background, the silhouette of the Enterprise seen from above against a green background and, finally an image of the Enterprise framed within a Vulcan salute – one of Mr. Spock’s characteristic gestures.

The world of Star Trek is celebrating its 50th anniversary since the launch of the original series, and the celebrations have taken the best possible form: the release of the third film version of the saga: Star Trek: Beyond. A story that is filled with interstellar adventures and which focuses particularly on one of the best-known characters – Mr. Spock, played by the actor Zachary Quinto from the TV series Heroes.

The USPS is supporting this new film release by issuing this series of stamps which are a must for your collections. Live long and prosper!