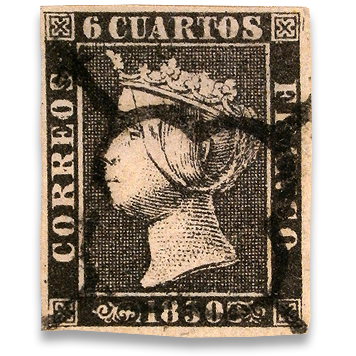 This is the stamp from the first issue carried out in Spain in 1850. Discover the origins of the postage stamp in the following article.

Ramon Marull’s collection keeps a historical stamp: the one of Isabel II of six quarters of Real, lithographed in black taint.

Under the reign of Isabel II, the Spanish State added itself to the countries that a decade before carried out a reform in the postal services.

The great change that the introduction of the stamp meant was started in Great Britain and Ireland thanks to Rowland Hill, who proposed a reform in the system to make it more efficient, popular and productive. That was in a moment in which it was necessary in order to continue with the country’s economic growth.

Before the postage stamp was introduced, the letter’s receiver had to pay the letter. The price, which depended on the distance – the cost of the transport – and the letter’s weight, used to be of a high cost and part of the population couldn’t afford it. That was why most o the correspondence was not accepted by the addressee, causing the Administration a serious economical prejudice, and affecting the country’s activity regarding communication (commercial, social, etc.).

Hill designed the pre-payment postage system introduction with standardized values and the use of adhesive stamps, as we know it today. Then, he stipulated that for sending a letter with a standard weight, the price would be a penny. In order to show that the letter was already paid, a kind of label was attached: the stamp. 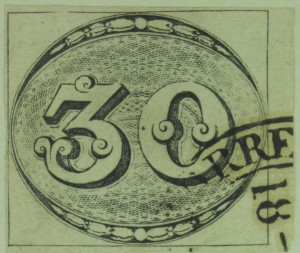 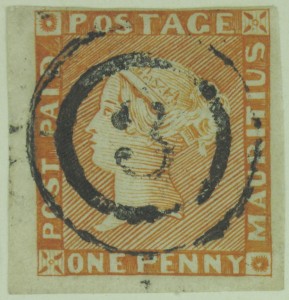 This proposal was accepted three years later (1840) by Great Britain’s government because it resulted in a more complex way of accounting the reuptake and distribution. But nobody doubted its benefits and efficiency soon. The best proof was its implementation in all countries. Amongst the first ones are the Swiss cantons of Zurich and Genève, Brazil (1843) and the canton of Basel (1845), the Unites States of America and Mauritius – then part of the British Empire –  (1847), France and Belgium (1849).

On 1 January 1850 was done the first issue of stamps. And the motif chosen to appear was the picture of the State’s maximum representation, Queen Elizabeth II crowned in profile.

The author of this stamp was Bartolomé Coromina Subirà (Barcelona, 1808 – Madrid, 1867) who was a teacher in the Academy of San Fernando, in Madrid. He was also director of the Fábrica Nacional del Sello since 1864, and, as a consequence, an employee at the National Treasury of the state.

At first, this postage pre-payment with adhesive stamp was valid only for the interior mail, so is to say, for the Peninsula and the Balearic Islands. The Canary Islands, Puerto Rico, Cuba and Philippines were not included, when the three last ones were still Spanish colonies.