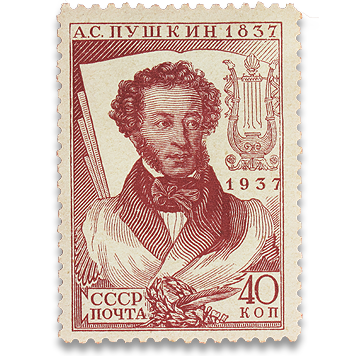 Poet, novelist and critic, Aleksandr Pushkin (Moscow, 1799- Peterburg, 1837) is considered the best Russian poet of all the times and father of the Russian modern literature.

Poet, novelist and critic, Aleksandr Pushkin (Moscow, 1799- Petersburg, 1837) became one of the fundamental pillars upon which his country’s modern culture is structured. He is considered the best Russian poet of all the times and father of the Russian modern literature. He was a multifaceted author, very strong and optimistic, who understood the multiple character aspects of his people.

Puixkin created for the Russian literature a style which participated in drama, romanticism and satire, and which had a great influence over the next Russian literary figures, as Nikolay Gogol, Fyodor Dostoyevsky, Lev Tolstoy or Fyodor Tyutchev, so as in the Russian composers Pyotr Tchaikovsky and Modest Mussorgski.

Even though he had such famous disciples, his creations are not so acknowledged outside his native country, mostly because of the difficulty to translate them in other languages.

His most famous work is Eugene Onegin, a love story placed in a realist and contemporary context. It is considered to be the first great novel in Russian language, although it is written in verse.

The historical drama Boris Godunov had a special acceptance among the public majority. This drama explains the ruler’s life, who became tsar at the end of the 16th century. Among the numerous interpretations done, it must be highlighted the one done by Sergei Diaghilev in 1908 at the Paris Opéra. The father of the Russian ballets started a brilliant professional career thanks to this mise en scene.

Another outstanding piece is Ruslan and Lyudmila, based on Russian folk tales that he heard during his childhood. An opera with the same title, based on this book, was composed by Mikhail Glinka.

His biography could be one of his romantic characters. Descendent of a noble family, he was a controversial man, loved by his people, but, at the same time, persecuted because of his ideas. His life was intense, with episodes of love adventures, jealousy, and defence of freedom, escapes and misfortunes. And it was so until his death arrived, because of some injuries suffered during a duel in order to defend his wife’s honour.

Nowadays, Russia remembers him through monuments, philatelic series, and giving his name to the Fine Arts Museum in Moscow too.