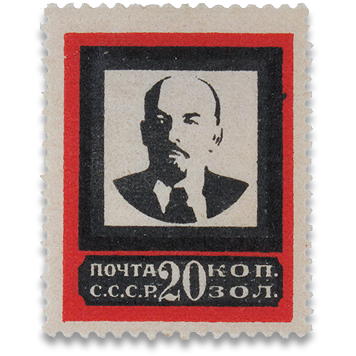 The representation of heads of state in stamps turned to be a constant throughout modern postal history. Mourning stamps show a great appreciation towards his figure and his key role in the country's politics.

This is a mourning stamp issued in 1924 on occasion of the Russian and first Soviet Union president’s death. Vladimir Ilyich Ulyanov, better known with the nickname of Lenin.

Traditionally, most of the illustrations or vignettes of ancient philatelic issues can be classified in three different themes: the head of the state image, the coat of arms or the government symbol.

The stamp’s illustration bearing the portrait of the ruler of the state is a recurrent topic since the beginnings of the postal services. The first stamp in history is a portrait of Queen Victoria. It was announced a competition in order to choose the better sketch to reproduce the first stamp, which would be known afterwards as “Penny Black”. One of the participants, Benjamin Cheverton, suggested that it was necessary to represent a human face because, according to him, it would be easier to detect counterfeits due to changes on the physiognomic features. This idea was well received in general, and, finally, Rowland Hill represented Queen Victoria as she was at that moment, a 18-year-old young lady.

Let’s return to the historical figure represented in the stamp which is our subject matter: Vladimir Ilyich Ulyanov, (1870-1924), Lenin. He was a lawyer, a Marxist thinker and founder of the Union of Soviet Socialist Republics (USSR). Exiled many times because of his ideas and revolutionary actions, he became leader of the Bolshevik faction for the Social Democratic Party, which would be later on known as a communist party. During the First World War, while he was exiled in Switzerland, he leaded the movement in order to try to position socialists against the war and to try to raise them to overthrow the existent governments, at a global level. Sometime afterwards, he could return to Russia after the First Revolution, and he even led the soviet Petrograd. He persuaded his fellows in the Party about the need of a second revolution that would led Bolsheviks to the power. Henceforth, and until his death, he led the revolutionary government as president of the Council of People’s Commissars. He died at the age of fifty-four as a consequence of the after-effects of a serious attack against him some years before, and also because of his heavy workload.

He is one of the most important figures in the contemporary history, and his image has been represented on many occasions and formats: paintings, posters, awards, medals. Clearly, he also had a big presence on philately, above all, during the historical period when the Soviet Union was in force. That stamp presents Lenin’s most iconic image: the portrait of a grown man with a calmed, thoughtful look, who exceeds the forty years, and with his characteristic trimmed beard. The representation corresponds to a design made by the artist Iván Dubásov (1897-1988).

The stamp is an integral part of stamps mourning series issued in commemoration of the Soviet Union leader’s death. Four different values are part of them. This philatelic category is used to pay tribute to some important personalities when they die, or to relive some painful event. This typology is accustomed to be presented in a black frame which delimits the central character, in order to highlight the funerary character.

In Marull’s collection we find other copies presenting an image of Lenin very different from the one showed here. It consists of four copies of stamps series that show his face in different stages of his live. Such a curious series was issued between 1933 and 1934 to commemorate the 10th Anniversary of his death.