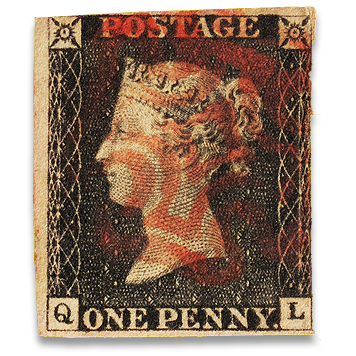 Queen Victoria I of England

“A bit of paper just large enough to bear the stamp, and covered at the back with a glutinous wash which the user might, by applying a little moisture, attach to the back of the letter”. That is how Rowland...

At first sight people can believe that this stamp is just one of many stamps with a monarch’s image. And it would be so if the stamp would not be the first postage stamp in history. Such honour has its privileges, and in its case the privilege resides in been known within the philatelic world as the Penny Black, or, as it is better known, as The Head of the Queen.

Victoria was crowned when she was eighteen years old, after the death of his uncle William IV. She will be the last queen from the Hanover’s German Dynasty, and then the Saxe-Coburg-Gotha will arrive.

History remembers Queen Victoria as a monarch endowed with excellent political and strategical skills to govern. Therefore, the period of her reign is known as one of the most magnificent moments in British history, known by historians as Victorian period. The Colonial Empire Expansion, the free trade adoption or the postal services regulation, among others, were some of the measures adopted under her leadership. She exercised her monarch duties for sixty-five years, and among all the titles she held was the Queen of Great Britain and Ireland title (1837-1901) and the Empress of India title (1876-1901). The marriage covenants and her longevity earned her the nickname of Europe’s Grandmother.

In 1837, the year of her accession to the throne, Roland Hill, who is today considered the creator of the postage stamp, published his handbook Post Office Reform: Its Importance and Practicability. He highlighted in it the urgent need to undertake a reform in order to regulate the postage services of the country, lowering the excessive postal costs and establishing a pre-payment system. It was not really strange in that situation that the low and middle class citizens were scared of the postmen presence, as the postage rate, which was charged to the addressee, could overcome an entire day’s work salary.

The problems regarding the postal services encouraged the queen to organise a committee in order to apply the measures defended by Hill himself. A public postal service will be initiated in order to revolutionise the delivery of letters. From January 10 of 1840 anyone could send a letter to any place in the country for a single cent. This fact had a great importance when the Industrial Revolution was at its peak, when the communications turned to be a decisive factor for improving the production. Furthermore, the letter would become the only way of communication for many families with members displaced to other cities for employment reasons.

The first postage stamp design shows the profile of a 15 years old young lady with the hair tied in a tiara, with a neoclassic appearance. The fact of choosing a face and not any other kind of emblem was because they considered it easier for the human eye to recognise a counterfeit.

The picture from which the stamps were engraved was charged three years before their issued, and they commemorated Queen Victoria’s first visit to London after her coronation. The original matrix for the stamps’ production of 1840 is now part of London’s British Postal Museum collection.

In a moment of full expansionist peak, the postage rate with the monarch (just as if it was a cameo) satisfied the political propaganda effect, and it was a symbol of power addressed to the extensive conquered lands. The colonial stamps with the face of Queen Victoria I could be found in British colonies from New Zealand, India, Africa or Australia, among others. It possibly was a subliminal action in order to direct the loyalty towards the British Empire. Certainly, Ramon Marull’s collection let us enjoy copies so interesting as the ones that are shown below.