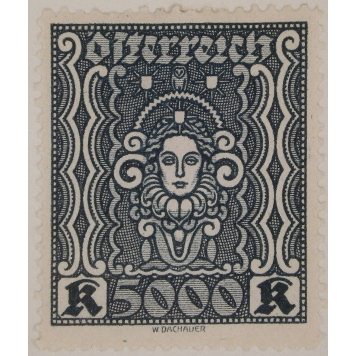 The article presented here explores the figure of the Austrian artist Wilhelm Dachauer prominent force within the philatelic world for his contribution to aesthetic design stamps.

Wilhelm Dachauer (Ried im Innkreis, 1881 – Vienna, 1951) is what we could call a vocational artist. The son of a family of watchmakers, he soon discovered his true passion – painting. To achieve his goal, he not only came up against (and from a very early age) his family’s wishes – while he was preparing his entrance exams for the Academy of Applied Arts in Vienna, he had to work as a decorator’s apprentice. Wilhelm entered the Academy when he was 18, and studied under Professor Griepenkerl from 1899 to 1907.

The Austrian painter’s career coincided fully with the artistic period of the Vienna Secession. From his first exhibition in the Secession Pavilion in 1913 (Ausstellung in der Sezession), he demonstrated his preference for painting rural settings. Together with a new generation of Austrian artists, he came to form a group of artists who shared a commitment to produce “popular art”.

The Sezession style has been given many different names, depending on the country. Some of the most commonly known are Modernisme, Art Nouveau, and even Jugendstil. As an international movement, they all took their inspiration from organic, natural forms. The artistic impact of this new style came to leave its mark on architecture, graphic design and, especially, on decorative arts.

Dachauer’s works were particularly important, especially in terms of graphic design. The artistic recognition of his works led to him being employed by the Academy as a teacher, a position he would hold until 1944. 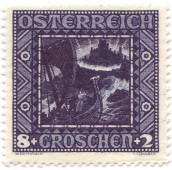 Both as a man and an artist, Dachauer was highly esteemed by the country’s authorities, to the extent that he was commissioned to design banknotes and stamps. In 1926 he produced the philatelic series known as the Nibelungen. These brought him great success, and for a time they were considered the most beautiful stamps in the world. Particular recognition was given to the stamp titled Gunters Drachenschiff auf dem Weg nach Island , which had a nominal value of 8+2 Groschen.

Austria’s annexation by the German Reich brought great social and political upheaval to the country. However, it did not hamper Dachauer’s professional fortunes; unlike other artists, the events boosted his career, as he received new commissions. These included commissions to design further sets of stamps, such as the ones known as the Homecomer series.

In 1981, Austria celebrated the centenary of Dachauer’s death. To commemorate his work, Austria’s postal service issued several stamps featuring the designs of the Nibelungen series. One of these can be seen to the left of this text.

The strength of his representation and his powerful lines are common characteristics in Dachauer’s work, and his artistic legacy in the world of philately has become a benchmark in the field of stamp design. Further examples of the artist’s work can be seen in the Marull collection.