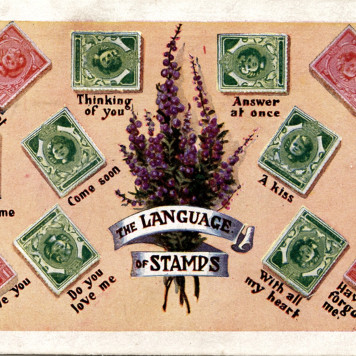 People’s facial expressions, looks and postures while they are having a conversation all send out messages that go beyond mere words. Non-verbal communication is crucial in helping us to understand and interpret the way we relate to other people. And at one time, postage stamps also played a part in people’s secret lives.

Thanks to today’s technology, we can now express ourselves from afar and communicate emotions without needing to be physically present. The popular emoticons are now more than just simple appendages to our text messages, they have become vital elements to help us understand a message’s real meaning, and the intentions of its sender. Often, they serve to emphasise the meaning of the text, or to highlight any implicit irony or sarcasm in its message. For example, if someone tells you that they won’t be coming to your party, and you send a text in reply, the line “Don’t come if you don’t want to” sends out a very different message to “Don’t come if you don’t want to ”. In the latter, the emoticon indicates that the sender is hoping that the recipient might change his mind and come to the party.

And so, going back in time, to the days when handwritten letters were the most common form of communication, a language of stamps was invented, separate from their normal use as postage. Thus, people found ingenious ways to include a secret meaning in their messages which they could not express in words for reasons of morality or decency.

This new phenomenon is thought to have begun during the Austro-Hungarian Empire (1867-1918), though later on it spread throughout the rest of Europe, and was particularly popular in England.

And because any new language needs to be understood by both the sender and the recipient, helpful guides to this new language began to appear. The first formal attempt at systematising it took place in England, where the secret language of stamps was particularly popular in the early 20th century, following the publication of Cupid’s code for the transmission of secret messages by means of the language of postal stamps, written by Bury George (Ashford, 1899). This book explained and graphically described more than 100 different messages that were based on the position of stamps on the envelope, and which way up they were placed.

Some publishing companies (such as the Regent Publishing Co. London) published cards that featured practical, summarised versions of the code, including all the most important messages. These cards represented shorthand manuals for people who were new to the code. 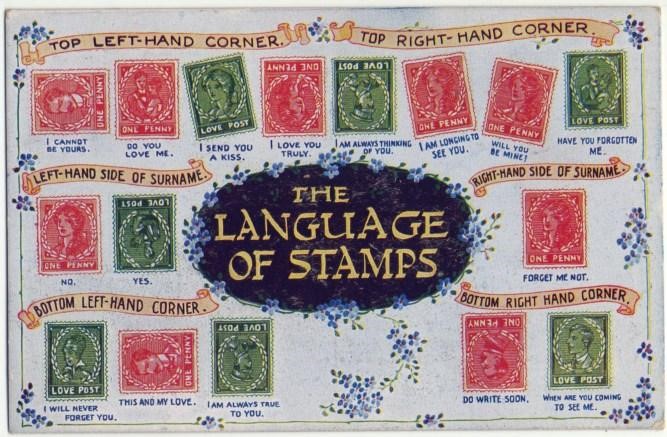 The content of the messages invariably revolved around the subject of love, hence the clandestine nature of the code. Declarations of love and romantic interest, desire and passion are just some of the feelings conveyed in these hidden messages. But there were others of a more practical nature, such as “Marriage is my main objective”, “Keep a count, our letters are being intercepted”, or “I will not expect you if it is raining”.

This summarised format was also published in other countries, which used a code of their own that did not always coincide with the more international language of stamps. 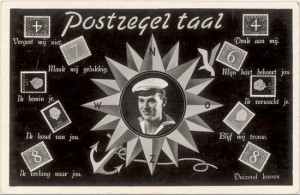 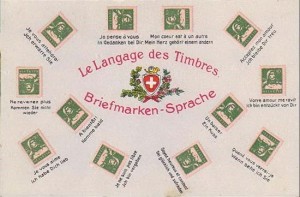 For many years, communications between lovers depended on the efficiency of the postal services. The Murray manual (London, 1879) is a historic document that records the frequency of deliveries within the London Metropolitan area in the mid-19th century. This document reveals that there were up to six deliveries a day between two separate points in the city[1].

But of course, a language stops being secret when other people discover how it works and the different meanings. In time, these stamp codes became widely known, even if people did not possess the exact key to decipher each message. For example, a husband who received a letter addressed to his wife on which the stamp was stuck upside-down would no longer put this down to the clumsiness of the sender; instead, his suspicions would be aroused.