Allegories and fiction characters Back |   Items 5 of 5 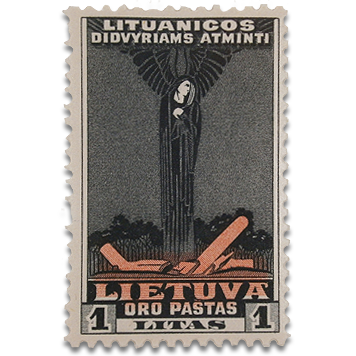 Plane crashed and allegory of death

Lithuania pays tribute to two well-known aviators who died during an unfortunate accident when they were trying to complete the first transatlantic flight.

All stamps tell many stories at the same time.

An example of the diversity of stories that can be classified into a so tiny label is this new “singular”. First, it talks about Lithuania, the Baltic country that in 1918 established itself as the Independent Democratic Republic of the Russian Empire. It was so until the Second World War broke out and disrupted the history and the political geography of the world.

From 1918 to 1940 Lithuania was a full member country with specific elements of a state, including public finances, currency – litas – communications, transport and a national postal services system. Completely normal apart from the fact that its capital, Vílnius, was in the hands of the Polish Administration throughout much of the country’s independence, and de facto capital was the country’s second great city, Kaunas.

The background of the stamp is about the homeland’s myths creation: Lithuania, which did not recover its independence until 1990, also had its own vault for the national heroes, respected and praised over the whole country. Figures that occupy a distinctive place are Steponas Darius and Stasys Girénas, two Lithuanian-American pilots who were responsible for one of the first historical attempts in aviation: to make the first flight between New York and Kaunas, more than 6.411 km, without layovers, an achievement that was admired by the whole country and the whole world.

Both pilots were from the Russian Lithuania, and both of them emigrated to the United States searching for a new life and a better future. With parallel lives, both of them enrolled in the North-American armed forces. The first one was instructed as pilot, the second one as mechanic.

Darius returned to Lithuania in 1920 and joined the armed forces of the country, where he finished his pilot training. Apart from pilot, he was a great athlete who promoted the construction of Kaunas’ great stadium (which now is named after these two pilots). It is considered to have introduced basketball, boxing, baseball, ice hockey and athletics into the country. Seven years later he returned to the United States, Chicago, where he worked as a pilot for the civil aviation.

When Stasys Girénas returned to his civil life, he worked as a taxi driver in Chicago, while he was learning to fly. He bought his first light aircraft in 1925 and he began his career as a pilot for the United States’ civil aviation.

The air plane, baptised with the name of Lituanica, was acquired by the pilots in 1932 and was completely remodelled in order to adapt it to the transatlantic flight’s needs. It left New York in July 1933 and, after crossing the Atlantic, it was diverted because of the weather in Ireland, and it crashed near the former city of Soldin, in Germany (nowadays Pszczelnik, Poland). Both pilots died on the spot. There were only remaining 650 km in order to arrive to the final destination in Kaunas. The causes of the accident are unknown, but all signs point to mechanic problems combined with adverse climatic conditions.

Darius and Girénas death caused a real commotion around the country, some national mourning days were declared and their burial was a multitudinous affliction act.

In order to remember the figures and their heroism, the Post Office published in 1934 several stamps, some of which are preserved by Marull’s collection. They are of different composition and value, but all of them pay tribute to the two pilots.

The stamp was made using the decorative style named “Deco”, a style arisen from the fascination in modernism, futurism, cubism, aerodynamic lines, skyscrapers, aeroplanes and trains, etc. This style had a great success on the conception of stamps during the last century’s 20s and 30s. The clear typography pays tribute to heroes remembered (DIDVYRIAMS ATMINTI) showing the value of the stamps (1 LITA) and the kind of issue, appointed to the air mail (ORO PASTAS). It frames the Angel of Death representation, dressed in black, with the winds outstretched and the tunic falling straight. At the feet, geometric fragments of the crushed plane can be found.

So this stamp not only has a strictly philatelic reading, but, at least, other three different readings: the history of the country, the history of dear heroes, and the influence of an artistic movement entirely modern on their graphic products. 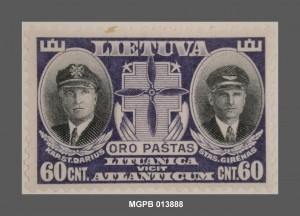