Allegories and fiction characters Back |   Items 4 of 5   | Next 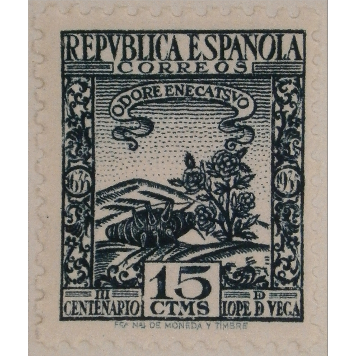 A rose that kills a beetle

This article is devoted to a stamp with a decidedly enigmatic appearance. With just one glance, we can see that it is clearly a story that doesn’t end well.

The stamp we are featuring today was issued and placed in circulation during the Second Spanish Republic, the political period that lasted from 14th April 1931 (following the deposing of King Alfonso XIII) to 1st April 1939, the day the Civil War ended.

The stamps issued during the Second Spanish Republic are notable for their individual quality, and the character series that is sometimes referred to as the “Distinguished Republicans” series is a fine example of this excellent work. The same period also produced a range of series commemorating great events, such as the expedition to the Amazon by the aviator and adventurer Francisco Iglesias, the 40th anniversary of the founding of the Madrid Press Association and the tri-centenary of the death of the sculptor Gregorio Fernández. But today we will be devoting this Singular to a historical anecdote that is rather unusual. 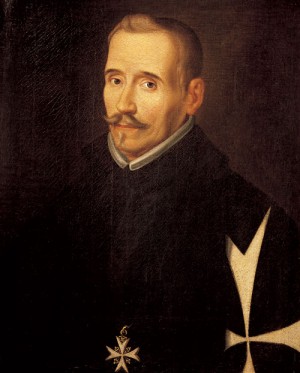 This 15-centime stamp commemorates the tri-centenary of the death of Lope de Vega (Madrid, 1562 – 1635). Félix Lope de Vega y Carpío is internationally known as one of the finest poets and dramatists of Spain’s Golden Age. His particular style was innovative within the world of prose, and his new vision gave rise to a fresh conception of theatre that was both daring and successful. His works tell stories from everyday life, masterfully combining tragic elements with comedy, and often appealing to the concepts of virtue and honour.

Iconographically speaking, the stamp is quite interesting given that the main image is comprised of three unusual features: a beetle lying belly up (we can suppose that it is dead), a bunch of roses and an inscription in Latin. We could come up with all kinds of wild theories to explain the meaning of this little scene, but in fact the background to this vanitas can be found (as is the case with many of Lope de Vega’s works) in the biographical life of the author.

The writer’s success and burgeoning reputation brought him many friendships and admirers, including Quevedo and Alarcón. However, it also gave rise to some memorable and infamous rivalries with authors such as Góngora and Cervantes. And the story told on this stamp is an example of the latter, referring specifically to the enmity of the poet Pedro Torres Rámila.

Pedro Torres’ biography is mainly notable for his literary disagreements with Lope de Vega. Torres was a harsh critic of Lope de Vega’s work; he accused him of failing to respect the classical Aristotelian precepts of comedy, which decreed that the story’s events should be set in a specific place and time. The situation reached its nadir in 1617, when Rámila published his satire Spongia. This work blatantly questioned Lope de Vega’s personal and literary honour, and thus represented a direct, formal attack on the latter’s dignity. The publication of this work caused great outrage among the dramatists who sided with Lope de Vega, and his friends. But the playwright exacted his revenge on Rámila a year later, with the publication of Expostulatio Spongiae a Petro Turriano Ramila nuper euulgatae (1618). In this work, the author rebutted Rámila’s claims with solid arguments, and included allegorical, satirical illustrations of the dispute. One of these includes the scene showing a beetle (representing Pedro Torres) that has been killed by the grandeur and superiority of a rose, embodying Lope de Vega, and features the lapidary inscription Odore enecat suo (“It kills with its fragrance”). 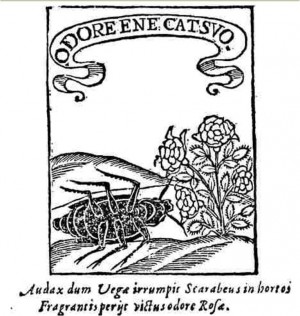 This illustration made such a lasting impact through time that it was selected as the vignette for the stamp issued to commemorate the 300th anniversary of the playwright’s death.