Allegories and fiction characters Back |   Items 3 of 5   | Next 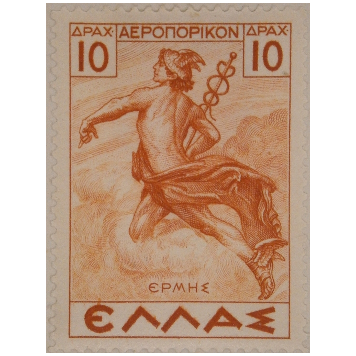 The messenger gods: Iris and Hermes

There are two quintessential messengers in Greek mythology: Iris and Hermes. They both feature characteristics and attributes that are closely related to the postal service, and thus their images have often appeared on stamps. Let’s take a look at some...

Everybody knows that communication is crucial for human relations. However, beyond the earthly realm, the Greek deities also needed to send messages, and this transmission of information is personified, within the pantheon of Greek deities, by the figures of Iris and Hermes. Thus it is no surprise that the design of stamps issued in the late 19th century and the first half of the 20th should take their inspiration from these characters, given that they are allegorical representations of the function of the postal service.

Iris is the personification of the Arch of St Martin (or the rainbow, which connects the world of the gods with humanity) and is also the herald of the end of storms. She was also one of the goddesses of the sea and the sky. As messenger to the gods, she travelled at the speed of the wind from one side of the world to the other, down to the ocean’s depths and to the underworld. Iris is portrayed in different ways: sometimes as a rainbow, but also as a young woman with wings. She is often shown carrying Hermes’ caduceus and a jug of water from the Styx, which she uses to put to sleep all those who perjure themselves. Another of the goddess’ tasks was to replenish rain clouds with water from the sea. She is sometimes confused, thanks to her appearance, with Nike, the Greek goddess of victory, whose name is now a well-known brand of sporting goods.

Hermes, meanwhile, is considered as the god of borders and transitions. A speedy, ingenious emissary, an intermediary between humanity and the gods, he moves freely between the mortal and the divine planes. He is also responsible for accompanying souls on their journey after death, into the afterlife. Another of Hermes’ tasks is to carry secret (hermetic) messages and to decipher them for their recipients; he is also the interpreter (hermeneutics) of secrets that are transmitted orally to the rest of the gods of Olympus. In addition, he is the patron saint of shepherds, thieves, liars and orators, of creativeness, trade, literature and poetry, and of sport and travellers. Classical Greek literature often portrays him as a joker and a trickster, and he is frequently shown disguised as other gods, whether it be for his own personal reasons or for the benefit of humanity. Generally speaking, he is portrayed with certain specific features: winged sandals, a purse, and a typical Greek wide-brimmed hat called a petasos, decorated with wings, one on each side. However, his most recognisable attribute is his caduceus, the winged staff with two snakes wrapped around it and shown facing each other.

The names of these two deities are still very present even today, and they have been updated to serve new functions. For example, their names have been used for many different projects linked with telecommunications and high-speed services. One example is RedIRIS, the information network that links universities and research centres.

Several characters from the world of science fiction have been inspired by figures from classical mythology. The main character of the popular US TV series “The Flash” (2014), based on the eponymous superhero comic book, is the “fastest man in the world”. The Flash is a superhero whose appearance and powers are very similar to those of the character from Greek myth – and his girlfriend’s name is Iris West! 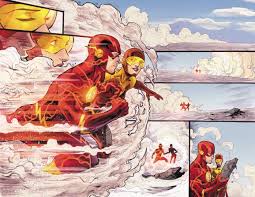 On many stamps that have been issued, the images of these deities have been used to evoke the very function of the mail, recalling the origins of messenger services and also establishing a link between mythology and the function of postal services. The latter idea is associated with the task of ensuring that messages reach their destination as quickly as possible.

The image of Iris has been portrayed twice on two different stamp series issued in France. The first series was issued between 1939 and 1944, designed and engraved by Georges Hourriez. Initially, these stamps were printed in Paris, but as the region became occupied by German troops in the summer of 1940, some batches were printed in Limoges. 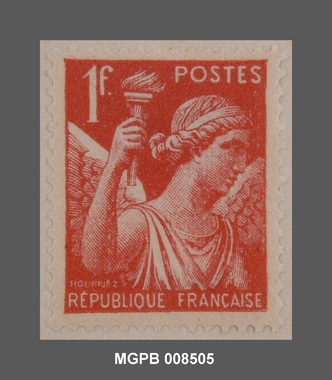 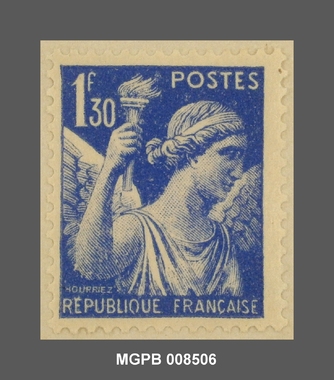 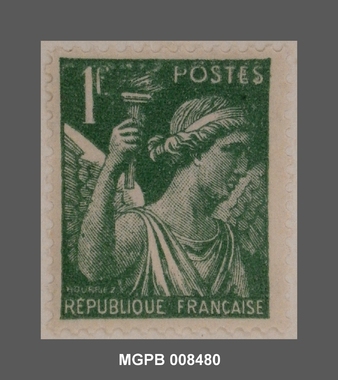 A few years later, in 1946, France issued a lovely airmail stamp featuring an image of Iris engraved by Pierre Gandon. This was no doubt created as a metaphor for the recent end of the Second World War. Once again, the rainbow was used to herald the fact that the storm was now over. 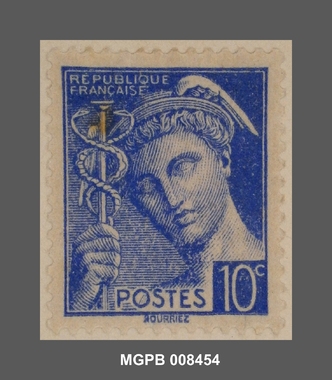 The image of Hermes has been used on numerous occasions for stamps issued in many countries around the world, including Greece, France, Austria, Poland, Italy, the Netherlands and Belgium. The image is commonly used throughout the world to symbolise the function of the postal service.

The Marull Collection contains one of the most valuable and unique series in the world: a series issued in Greece that features different heads of Hermes. In the world of philately, this series is widely praised for its elegance and perfection, and for the fact that it was designed by the renowned French engraver Désiré-Albert Barre. The first issue, printed in France in 1861, was in fact the first series of stamps ever issued in Greece’s postal history. This series is known as the “Large Hermes heads”, as opposed to the 1886 series, called the “Small Hermes heads”.