Allegories and fiction characters Back |   Items 2 of 5   | Next 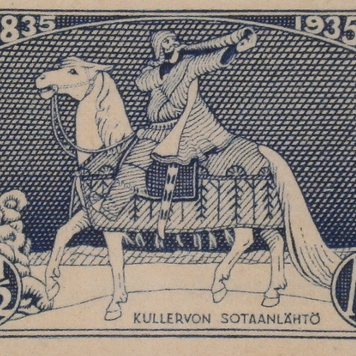 The Norse legends of Kalevala

Stamps are a timeless testimony to people who have left a permanent mark on history. Elias Lönnrot (Sammatti, 1802 - Sammatti, 1884) is an important figure for the people of Finland.

Elias Lönnrot (Sammatti, 1802 – 1884) studied medicine at the Academy of Turku, the first university founded in Finland during the period of Swedish rule. Later on, he continued his studies in Helsinki. His professional experience as a doctor coincided with a period of great hardship for the citizens of Kajaani. A series of bad harvests produced a sharp decline in agricultural production, which subsequently led to a period of famine and, consequently, a marked increase in illness and disease. Lönnrot, one of the few doctors in the city, saw people falling ill every day, and he was deeply upset by it. The high price of medicines, as well as the high cost of medical treatment, meant that most people turned to traditional healers, those these tended to provide mere palliatives that failed to cure the patient’s sickness. Well aware of this desperate social situation, and demonstrating his great sense of commitment, Lönnrot wrote letters to the authorities – which have survived till the present day – asking them to send food instead of medicines.

However, while his main work was in the field of health, it was his philanthropy and his everyday contact with people that led him to his true vocation – philology. But Lönnrot’s study of the Finnish language went far beyond the academic sphere, as he made numerous journeys throughout Finland, during which he compiled a great deal of oral material that was only conserved by memory and handed down from generation to generation, mostly in the form of ancestral songs and tales. The fieldwork from his successive expeditions led him to publish numerous works which are now an important source in the study of Finland’s intangible heritage.

Out of his most important publications, we have chosen to focus on Kalevala (1835), an extensive compilation comprised of 22,795 verses divided up into 50 songs which come from such places as Finland, the Baltic countries, the Kola Peninsula and Karelia. The Norse poetic myths and legends that the work contains bear direct comparison with the great historical epic poems such as the Iliad and the songs of the mediaeval age. The poem recounts the heroic actions of Väinämöinen and the territorial struggles between Kalevala and Pohjola. There have been many different historical interpretations of the tales and their meaning, though most historians and scholars agree that the country of Kalevala is southern Finland and Pohjola is Lapland, a territory in which a crisis of values and principles took place between the Finnish and the Sami peoples. The historical, ethnological and cultural richness of the tales means that they are now considered to be among the most important works in the world, and have been translated into over 70 different languages. 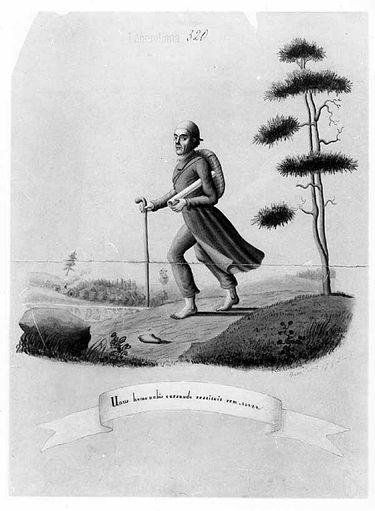 Kalevala had a major impact on Finnish society, an impact that has lasted until the present day. Many of the names of the characters and places mentioned in the book can be found today in the names of streets, city districts, commercial brands and businesses. Art, music and cinema have also taken their inspiration from the numerous stories about the characters in the tales. In fact, the extent to which the book has been accepted as a work of heritage that has helped to define the country’s identity is illustrated by the date chosen as Finland’s Day of Culture – the 28th May, the date when the first edition of Kalevala was published.

In 1931, the Finnish postal authorities paid homage to Professor Lönnrot by issuing a stamp featuring his image, on the occasion of the centenary of the Finnish Literary Society. As we can see from the selection of stamps below this article, he is portrayed as an elderly gentleman, and as a dignified leader.

Four years later, the world of philately celebrated the centenary of the publication of Kalevala by issuing three more stamps, all featuring very different images. It was by no means by chance that the designer Jorma Gallen-Kallela was commissioned to illustrate thes stamps; Jorma was the son of Akseli Gallen-Kallela, a well-known Finnish painter who had also illustrated the Kalevala.

The 1¼ mark stamp shows two people seated face-to-face and holding hands. The runes explain that some of the verses collected were sung in this type of ritual, during which the singers swayed back and forth. 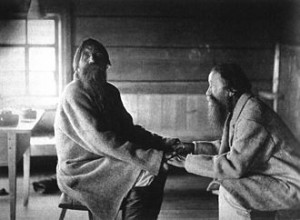 The second stamp (2½ marks) shows Kulervo mounted on his horse and blowing his horn. According to legend, Kulervo was a misfit who had a tragic life story. The spirit of this character inspired several great works in different fields. The best-known, and most popular, was created by the novelist John R. R. Tolkien, author of The Lord of the Rings, who based his character Túrin Turambar on Kulervo. Turambar appears in The Children of Hurin and The Silmarillion, two posthumous works published by Christopher Tolkien.

Kulervo ready for battle. A fresco painted by Akseli Gallen-Kallela, 1901. The Ateneum.

The 2-mark stamp features a curious illustration – a ship with a huge bird flying above it. This is a scene from legend about the war between Louhi and Väinämöinen. According to Finnish and Lappish mythology, Louhi, Queen of Pohjola, was a human who had the ability to transform into other creatures. During the course of the war, Väinämöinen robbed her of the Sampo, a highly valuable magical artefact. In order to regain the Sampo, Louhi turns herself into a bird and carries out a violent attack on the vessel. The wizard Väinämöinen would also be the inspiration for another character created by John R. R. Tolkien – Gandalf, the wizard who is one of the main characters in The Lord of the Rings and The Hobbit, and who was brilliantly portrayed in the films by the actor Ian McKellen. 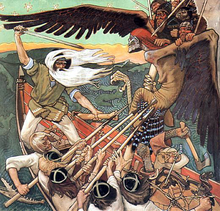 “The defence of the Sampo” painted by Akseli Gallen-Kallela, 1896. Source: Wikipedia

If all of the above has whetted your interest in these tales, there is an edition of the book available in Catalan, written by Ramon Garriga-Marquès and titled El Kalevala: la gran epopeia del poble finlandès (1997).